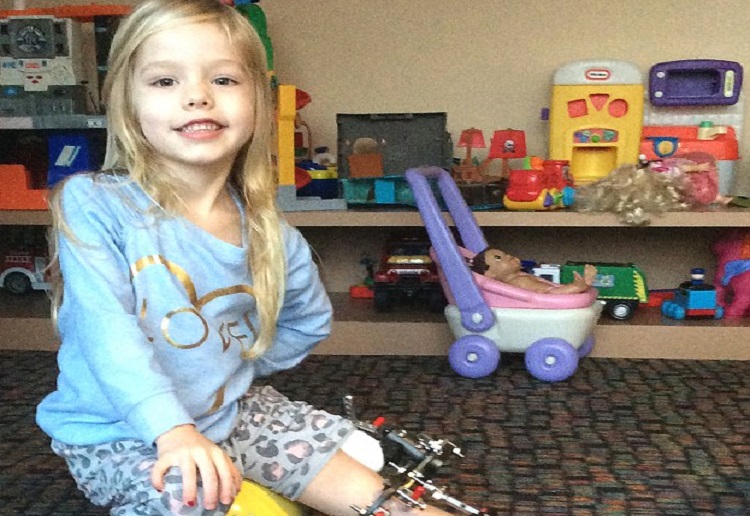 Four-year-old, Elsie, had to have her leg broken THREE TIMES a day for four months to avoid amputation after being born with one limb longer than the other.

Elsie Moravek from Michigan, was born with proximal femoral focal deficiency (PFFD), a rare disability, which meant her left leg was deformed and much shorter than her right, The Daily Mail reports.

Elsie’s mother Jackie, 28, and father Matt, 31, decided to have their daughter’s leg broken more than 300 times in four months – or three times a day – in a bid to lengthen it by just over four inches. The only other option was amputation or prothesis.

‘A few local doctors suggested amputation, and we considered it because the leg lengthening process is so difficult to endure,’ said Jackie, a resource analyst.

‘We asked ourselves if we were being cruel to put our daughter through this and whether it was worth it.

‘But we knew it was the right decision. We wanted Elsie to have the best life possible.’

Elsie’s femur and tibia were surgically split apart and fitted with an external fixator device, with ten pins piercing through her skin, muscle and bone. 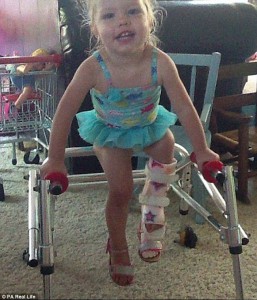 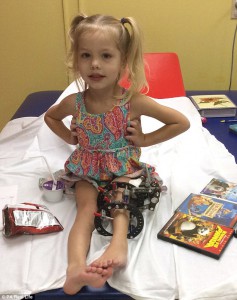 Three times a day, Jackie had to manually turn screws to pull apart her daughter’s femur and tibia 0.039 inches a day, preventing the break from healing each time. New bone, muscle and skin grew in its place as the leg gradually lengthened by more than four inches.

Elsie was on constant pain medication throughout her treatment because it was such an agonizing procedure.

Jackie said ‘I felt very helpless. I was very pleased with her progress but it was hard to see her in pain and crying,’ she said.

‘I would have to put my mum hat on and push through it because I knew what the end result would be.

‘Cleaning the open wounds where the ten pins had been drilled into her bone was the worst. It was agony for her. I felt upset watching her go through it, but we had a goal in mind.’

Elsie’s legs are now even – but, as her left limb still has a growth deficiency, they will grow out of alignment again.

She will require another procedure to lengthen her left leg by nearly a further four inches once she reaches her full height. But despite all the pain and effort, Jackie said it is ‘worth it’.

We wish little Elsie all the best.