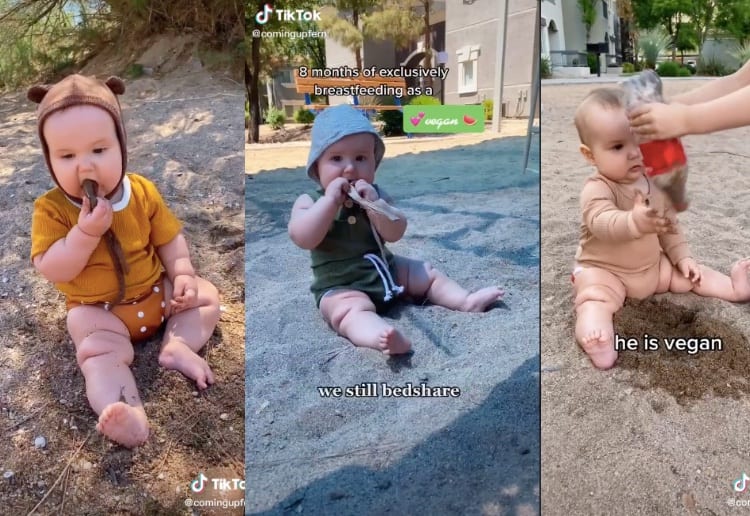 We’re all in for the “5-second rule” (food dropped on the floor is OK to eat if you pick it up in 5 seconds or less) but one mum has taken this to the extreme and lets her young baby eat dirt and chew on rocks.

Alice Bender, 22, a passionate vegan, shares a number of eyebrow-raising videos on her TikTok channel, showing her “crunchy son” eating sand, dirt and chewing on rocks and sticks.

She said that while her eight-month-old boy is exclusively breastfed, she said that she lets him chew on whatever he decides to put in his mouth. But we’re not talking about a stray crust of bread or a discarded cookie. No, her TikToks show Fern digging his squidgy hands into beach sand and putting fistfuls into his mouth. In one video, Alice hands baby Fern a dirty rock and the bub immediately gives it a good suck. Just seeing that skyrockets my germ-phobia to Mars and beyond. Seriously, who does that?

The alternative mum-of-two, also loves to show how she takes her bub on shopping expeditions where she is totally chilled out when Fern licks the dirty shopping trolleys. Yuck!!!

Bacteria Is My Friend

“I do not fear bacteria. In fact, I welcome it. I trust nature and my baby. It is not a coincidence babies have this instinct while they are breastfeeding,” the controversial mum declared in the video, which has attracted over 6.2-million views and over 23,000 comments.

She also said that she takes him outside as much as possible but doesn’t use sunscreen as she doesn’t “fear the sun”.

Burnt To A Crisp!

While there are always going to be those who support her weird ways, the majority of commenters on the video were shocked, especially about the no sunscreen admission.

“I feel like you’re treating him as an experiment,” one person wrote.

“I get where you’re coming from, but also parasites, flesh-eating bacteria, meningitis, measles, MRSA etc…” another said.

“It’s one thing letting your child eat food off the ground, but you’re taking it too far,” another said.

“The only crunchy thing about your baby is its skin!”

Is This A Joke?

Many viewers actually thought that the video was a joke.

“This is a joke right?” one asked.

Alice has a whole host of controversial videos on her ComingupFern channel, which has over 275,000 followers. She shares her unassisted home birth story, talks about her vegan lifestyle and how she goes “dumpster diving” for food. There are certainly all types in this world!

Are you chilled out or neurotic (or somewhere in the middle) about letting your kids eat dirt? Do you agree or disagree with this mum’s lifestyle? Tell us in the comments below.