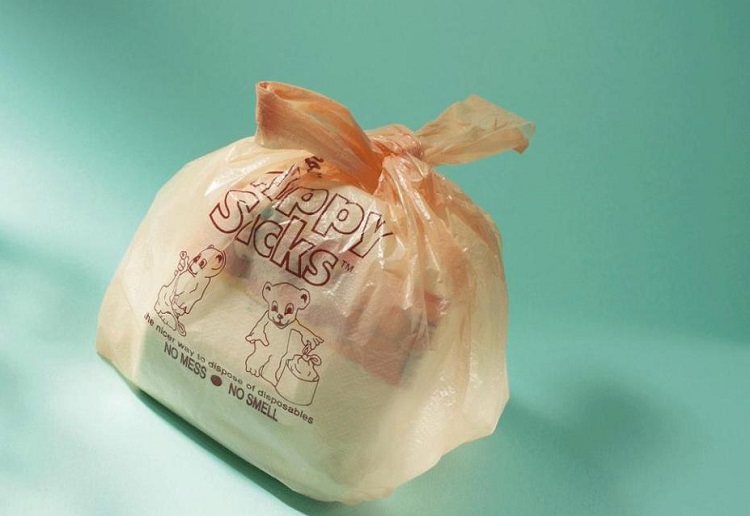 SAFETY experts are warning parents of the dangers of nappy sacks after the death of 16 babies.

The Royal Society for the Prevention of Accidents in the UK have met with manufacturers and retailers to demand new packaging and hazard labels on nappy sacks. They want the sacks to be sold on perforated rolls, rather than as single sheets to make them harder for babies to grab.

RoSPA also want them to be non-scented so tots do not mistake them for food and for warning labels to advise parents on safe storage, reports THE SUN.

The charity’s Sheila Merrill said: “We want to maximise public awareness of this serious risk to young lives, and develop a code of practice for the manufacture and labelling of nappy sacks.

“Where these deaths have occurred, typically the sacks have been stored within the baby’s reach, close to the baby’s cot, including under the mattress, usually for convenience.

“The parents clearly have not made any association between the nappy sacks and any sort of risk from suffocation or choking.

“We can change this with adequate education and awareness, but we also want manufacturers to consider safety approaches such as making them unscented, producing them on a roll rather than as individual sheets, or new packaging.”

Nappy sacks have been implicated in causing suffocation and choking of 16 babies aged less than one year old. 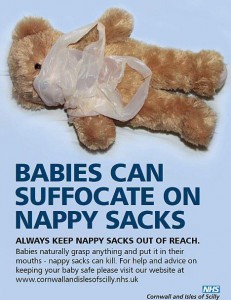 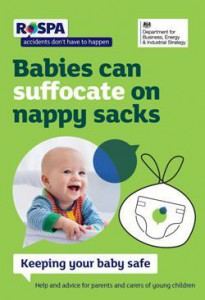 The death of a baby due to asphyxia from a nappy sack was brought to the attention of Beth Beynon, a child accident prevention co-ordinator, in September 2010.

This highlighted that asphyxia from nappy sacks had caused up to ten known deaths in babies across England and Wales alone.

Beth Amison, a mum-of-two, from Staffordshire, is supporting RoSPA’s nappy sack campaign following the death of her seven-month-old son Maison in 2013.

The 23-year-old said: “I don’t want other parents to suffer the same devastating tragedy that my family went through.

“My world fell apart because of a nappy sack.

“It was on March 7th that I went into Maison’s bedroom to wake him up – only it wasn’t his beautiful smile I was greeted with.

“Instead Maison was lying in his cot with a handful of nappy sacks scattered around him and one was covering his face.

“Our changing stand had been placed next to the cot, as many people’s are, and in the pockets of the stand, I had placed nappy sacks months and months before.

“The cot was on the highest setting because Maison had never crawled.

“He could sit, but only if you placed him that way.

“However, that day he must have learned to stand for the first time as that’s the only way he could have reached the changing stand.

“Since Maison died, I share the dangers of nappy sacks to other parents through my Facebook page called Maison’s Memory.

“It’s important for anyone looking after babies to be aware of the risks nappy sacks pose and what they can do to prevent more unnecessary deaths.

“Never think it won’t happen to me.”

RoSPA warns: “The typical scenario associated with the deaths is that the sacks are stored within the baby’s reach, close to the baby’s cot – including under the mattress usually for convenience.

“In some of the cases, the nappy sacks had been left near to or in the cot for ease of changing the baby’s nappy in the night.

“The light flimsy plastic material of the bag is easy for a baby to grasp automatically, and then instinctively bring to their mouths for exploration, which can lead to obstruction of the nose and mouth, and even inhalation.

“Informal feedback from parents and carers and professionals demonstrated that the risk to young babies is compounded by the fact that widespread usage of nappy sacks is a relatively recent phenomenon.

“Parents and carers are generally aware of the dangers posed by plastic bags, but do not make the same link to nappy sacks and so are less likely to take the same safety precautions.

“The risk of this potential hazard is increased by the lack of mandatory suffocation warning advice on the packaging, and the product’s frequent availability as loose bags in a packet, as opposed to supplied on a roll.”

A recent survey by Trading Standards identified a number of nappy sacks that were not adequately labelled with warnings.

Claire Taylor, from Buckinghamshire and Surrey Trading Standards, said: “There is a serious suffocation risk from these widely-used products and our research found this is not always made clear in the packaging they come in.

“We want it to be mandatory for nappy sacks to carry proper warnings but there are other things which would also help such as selling them perforated in rolls to make it harder for babies to grab them.”

Original story and Image via The Sun