Article We Fear What Message This Behaviour is Sending Our Children 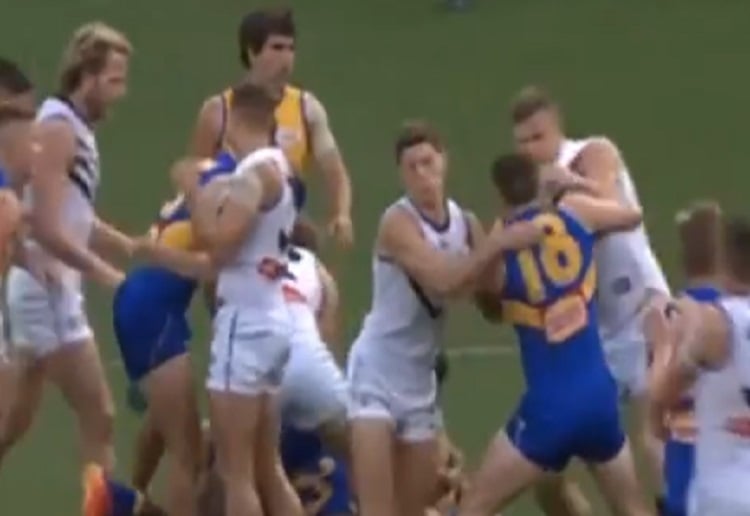 A young AFL star will be eating through a straw for four weeks after suffering a broken jaw in an unprovoked onfield attack.

West Coast Eagles player, Andrew Gaff, will argue he tried to punch the teenager’s chest when he shattered his jaw and knocked four of his teeth out in a sickening on-field incident that will likely end both players’ seasons.

Fremantle Dockers young gun Andrew Brayshaw, 18, spent Sunday night in hospital after he was hit  in an off-the-ball clash during the match at Perth’s Optus Stadium.

Gaff, 26, who will face the AFL tribunal on Tuesday night, told his coach he tried to strike Brayshaw’s chest, but instead connected flush with the teenager’s jaw.

I’d just like to thank everyone so much for their ongoing support over the last 24 hours. I truly appreciate each and every message that I’ve received and it’s helping keep a smile on my dial ????

‘Hand on heart and speaking to him post game, he legitimately said to me he didn’t mean to hit him in the head,’ Eagles coach Adam Simpson told Channel Seven.

West Coast Eagles CEO Trevor Nisbett said Gaff was ‘beside himself with what happened’.

‘I think people saw the remorse he has under this situation, but it doesn’t go to exonerate him from the action,’ he said.

Gaff is almost certain to be suspended for the remainder of the season, perhaps even into the early part of next year, while Brayshaw’s season is over.

The teenager underwent surgery on Sunday night and will be eating through a straw for the next four weeks.

Prominent lawyer and Fremantle Dockers foundation member Tom Percy said a criminal investigation against Gaff was needed and that Gaff could face criminal charges for the ‘cowardly assault’.

Western Australia Police Commissioner Chris Dawson has confirmed they will ‘make an assessment’.

Commissioner Dawson told Perth Now it was rare for police to step in on incidents that occurred on a sporting field but they would make an assessment as it was a matter of ‘public interest.’

“We have checked in with Andrew Brayshaw, we spoke to Mark. Fortunately he is in a reasonable position considering what happened. We take full responsibility for the incident, as does Gaffy. We are very apologetic to the Brayshaw family and to the club.” CEO Trevor Nisbett pic.twitter.com/b74C8lURo4

Andrew Gaff has been referred directly to the AFL Tribunal for striking Fremantle’s Andrew Brayshaw. pic.twitter.com/1btGV3ORst

What message are we sending our children?

I sat and watched the news with my teenage son who is an aspiring AFL star and he was horrified.

His first comment was if he did that at school he would be suspended or worse.  If you did that to someone in the street you would be charged with assault.

So this football player seriously needs to be held to these standards as well. Surely it should not make a difference that he was on a football field mid game.

If he gets away with a warning and a few weeks suspension, what is that teaching kids? They need to see that it is not acceptable at all, on or off the playing field.

I truly hope he turns this around and does some public speaking about the incident at schools to spread the message that what he did was so very wrong.

What are your thoughts?