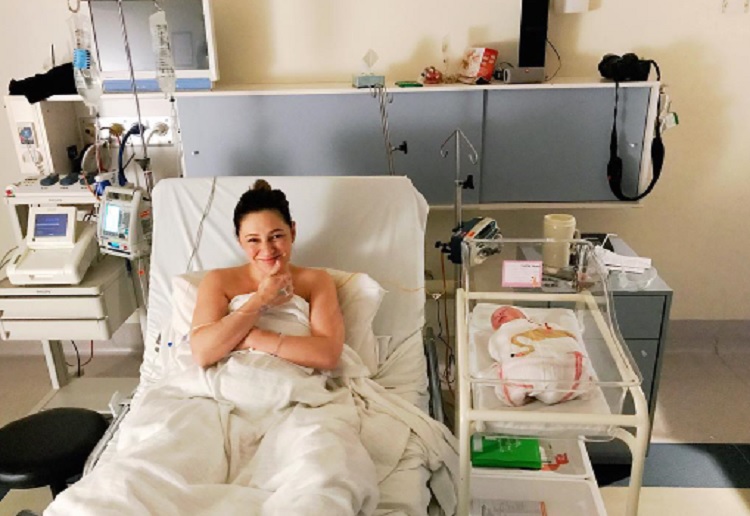 For Zoe, who already has a three-year-old son Sonny with her radio host husband Hamish Blake, it was another “good, positive birth” when they welcomed Rudi into the fold.

“I went into spontaneous labour at 2:30am the day before my due date, had my waters broken at around 4cm, (7am), then laboured like a, well, mother, til I was about 7cm dilated,” Zoe wrote.

“I used gas for pain relief and quite loved it. (Last time I was given morphine and I deeply regret it. It made me spew a lot and I was so fuzzy. For days. Foul.)”

After an epidural – “all efficiency and magic” – so she could rest during what ended up being a 13-hour labour, Zoe later welcomed her daughter after 15 minutes of pushing.

She credited acupuncture, acupressure massage and mediation for her positive experience – and also adorably thanks her daughter.

“Rudy helped me as much as I helped her,” revealed Zoe. “I am so grateful to her. She was an exceptional birthing partner, in the true sense of the term.”

In spite of this, there’s been some dark days for Zoe as she’s struggled with the pressure of coping with a newborn and a toddler, admitting she’s suffered from Post Natal Depletion.

“The fact that two children need you constantly, and at exactly the same time, was an entirely new and wildly challenging experience. After three years parenting just one (pretty chilled) kid, I felt totally unequipped and out of my depth,” wrote Zoe.

“I don’t think I was anywhere near PND [post natal depression], (I have several girlfriends who were diagnosed after their second baby; so be alert for the symptoms), it was simply, as a friend pointed out, PND. Gah! The same acronym, how awkward!

But this PND stands for Post Natal Depletion. Being hormonally, physically, and emotionally depleted…. Or in other words: being a mother.”

Crediting her support network, including a night nurse, to help her get some sleep, the mum offered invaluable advice to new mums.

“Tip: when your parents ask what they can give you for your new baby, ask for a night nurse voucher,” she revealed. “Cos when mum gets sleep, the whole family benefits.”

It actually looks like her blog is still down!? People sure love reading about Zoe.

Did you write your birth story at all? We would love to share them!  You can read one of mine HERE .