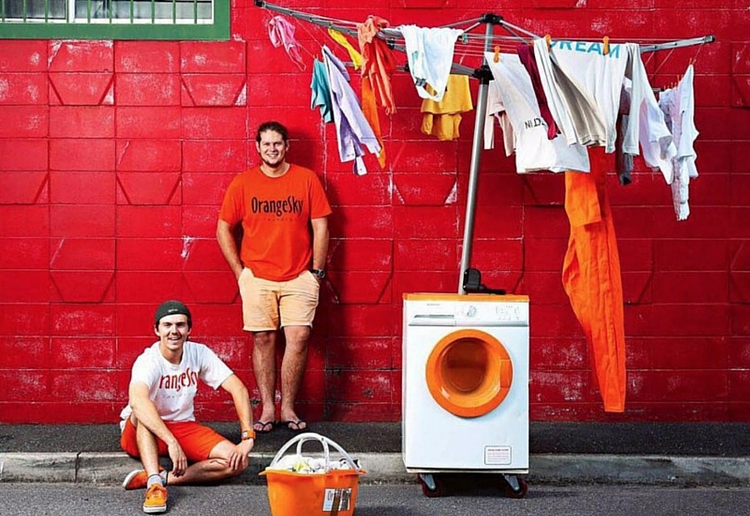 The Young Australians of the Year Award has been given to two inspiring young men who are working to help the homeless.

Inspired by organisations like mobile libraries and Meals On Wheels who often help the less fortunate in our communities, two Australian lads have created a mobile laundry to wash the clothes of the homeless.

In September 2014, best mates Nic Marchesi and Lucas Patchett, both 21, decided to give a mobile laundry specifically for the use of homeless people a go.

“We wanted to improve the hygiene standards of the homeless, so we came up with this crazy idea of building a free mobile laundry,” Nic told the ABC.

Small steps were the key to starting this venture.  The Brisbane boys fitted an old van nicknamed ‘Sudsy’ with a generator, water tanks and two large washing machines and driers.  Then they started driving around town offering to clean the clothes of those people that were sleeping rough.  Parking their laundry van near food vans and free barbecues allowed the homeless to have their clothes washed while being fed.

Armed with enthusiasm to make a practical difference and strong social media skills, Nic and Lucas quickly expanded the service to Melbourne, Sydney and the Gold Coast

Their charity now known as Orange Sky Laundry, named after one of their favourite songs, operates in 36 locations and washes 350 loads each week. The charity itself continues to grow, with over 270 volunteers, and governments and local businesses coming on board to assist the charity to be more sustainable for the long-term.

Nic and Lucas  have now been honoured with the title of Young Australians of the Year to recognise their work to boost the respect and improve the health standards of homeless Australians.

Accepting the award, Lucas said the laundry service began as a simple idea: “Clean clothes and conversation.  But after 70,000 kilos of washing … we realised it is so much more. We can restore respect, raise health standards and be a catalyst for conversation.

“We have found a way to treat others how they want to be treated.” Nic said that last week, he met homeless man Grant, and washed his clothes for the first time.

“As I passed Grant’s laundry back to him, he told me something I’ll never forget. He said, ‘Nic, I haven’t been able to have a conversation with anyone for over three days’.”

The mobile laundry was initially a small idea, but it is obviously making a big difference to many homeless people around Australia.