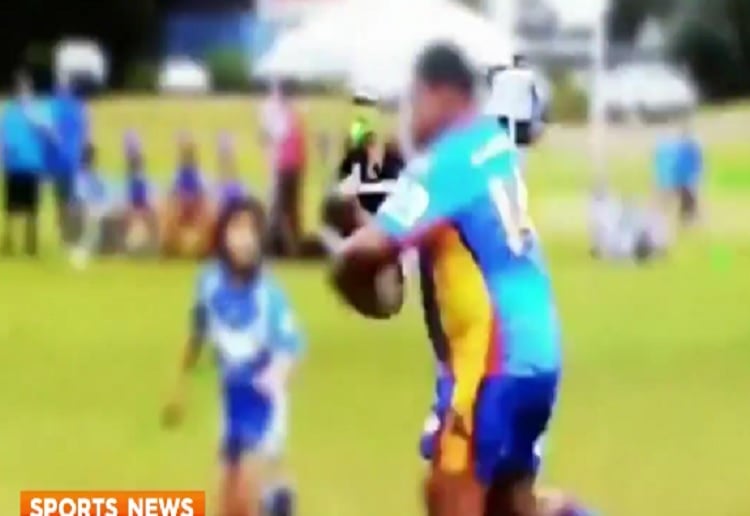 An eight-year-old boy has found himself at the centre of a debate over junior rugby league regulations.

A video posted to Facebook shows the eight-year-old boy playing in the under nines, some are saying the young boy is twice his teammates’ size, reports 9 news.

The footage has sparked a fierce debate online about size versus weight within the league, and whether regulations should be changed.

The St Johns Eagles chairman, Nasser Matta, told News Corp his club is “just following the rules” and added that “there are some even bigger kids playing”.

“This boy’s a gentle giant,” he said.

“He’s aware of his size. He could pick up kids with one hand if he wanted to but he’s just a nice gentle boy. He’s a good kid from a good family who just loves playing footy.

“I don’t want the kid to think he doesn’t deserve to play footy because of his size.”

A parent from the opposing team, the Berala Bears, posted videos of Saturday’s match to Facebook, including one showing the team banding together to tackle him to the ground.

“It can be done,” he said triumphantly.

The proud parent said the St Johns Eagles team are “such an awesome side to play against”.

The NRL has faced calls to change the regulations for the junior league for years.

A change of policy, to create division using weight instead of age to prevent children from getting injured, is being trialled in Sydney’s west.

Canterbury Bulldogs chief executive Raelene Castle said the differing sizes of children is a “realistic” problem faced by the sport.
“This is one of the realistic challenges we face in our game,” he told News Corp.

“You move these boys up an age group and while their bodies are big enough to deal with it physically, they are not old enough mentally. It’s a tough one that the NSWRL is now looking at.”

7 sport reports that, after reading insensitive and cruel comments on social media, the boys’ parents were understandably reduced to tears.

To make matters worse, the boy has now been withdrawn from the team for this weekend’s game.

One dad of a teammate from the St Johns Eagles Under 8s – who compete in the Canterbury-Bankstown junior league said, he now has deep regrets over uploading the video to the team’s public YouTube page.

“We put all the highlights of the team’s tries there, but now we’ve made it private,” he said.

“The fact is the boy only joined the team six weeks ago – and has only scored three tries. It’s not like he’s knocking over kids every time he touches the ball. In fact, he’s very gentle and aware of his size.”

The father also added there were no complaints from the opposition on the day, Moorebank Rams.

The video predictably re-ignited the debate over weight-for-age competitions, a model the NSWRL is trialing in some Western Sydney competitions.

The below vision sparked the age versus weight debate

I am sorry but I really don’t think size should ever come into it – he is the same maturity as his peers in his age group, why on earth would you even consider putting him in a side with 12-13 year olds?

Do you think junior footy should be played according to age or size?