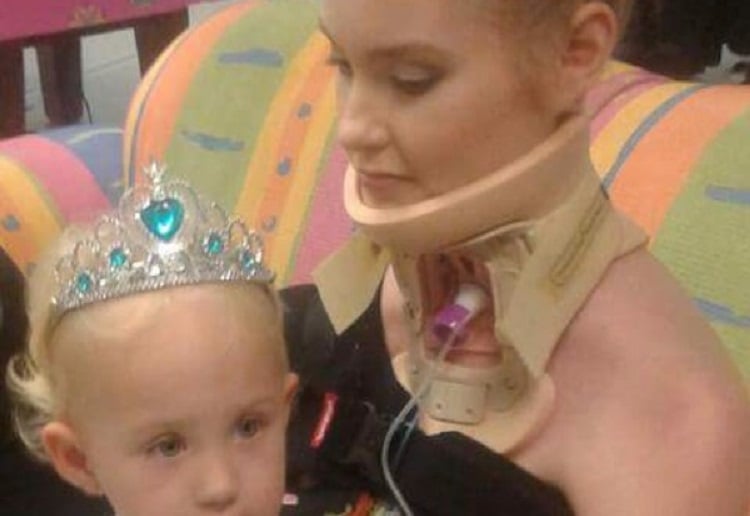 A young Queensland mum has told how she went from being perfectly healthy to in a coma and paralysed from the waist up.

Emily Stokes was just days from celebrating her 21st birthday in May last year when she suddenly began to throw up and have dizzy spells.

Being 17 weeks pregnant with her second child, Ms Stokes said she initially thought it was just morning sickness, but went in to see her GP anyway.

“My doctor said it was vertigo, to go home and I’ll be fine,” Ms Stokes told Nine.com.au.

“But I kept throwing up and then my neck got really sore so I was told to have a shower and go to bed and that’s what I did.”

When Ms Stokes woke up the next morning she came to the terrifying realisation that she couldn’t move her arms, hold her head up or even swallow properly.

Ms Stokes was rushed to Ingham hospital where a CT scan showed haemorrhages on her brain and spine.

She was transferred to Townsville Hospital where her condition continued to deteriorate and she was placed in an induced coma.

“I woke up ten days later from the coma with a blue tube down my throat and paralysed from my waist up. I was in intense pain,” Ms Stokes said.

Doctors were forced to terminate Ms Stokes’ unborn child because of the harmful effects of the medication needed to treat her.

Ms Stokes has now been in Townsville Hospital for 325 days and is still suffering from her paralysis. Unable to hold her head up or swallow properly, she has a tracheostomy.

Unable to eat or drink by herself, Ms Stoke needs constant care and her life depends on three machines – a ventilator, cough assist and a suction machine.

Doctors have diagnosed Ms Stokes with a form of acute disseminated encephalomyelitis, a rare autoimmune disease that affects eight in one million people and causes inflammation of the brain and spinal cord.

Her stumped doctors have no idea what triggered the disease and haven’t been able to offer Ms Stokes any hope that her condition might improve.

Adding to Ms Stokes’ heartbreaking plight is the separation from her two-year-old daughter Etosha who is living one-and-a-half hours’ drive away from Townsville Hospital in Ingham with her husband Graham Stokes and mother-in-law.

Ms Stokes’ brother, Karl Lovett, has set up a fundraising page in the hopes of raising enough money to allow his sister to return home from hospital and be with her family.

The machines needed to keep his sister alive, each cost $10,000 and are not covered under the National Disability Insurance Scheme.

Ms Stokes will also need a 24/7 carer to help her function at home and look after her child.