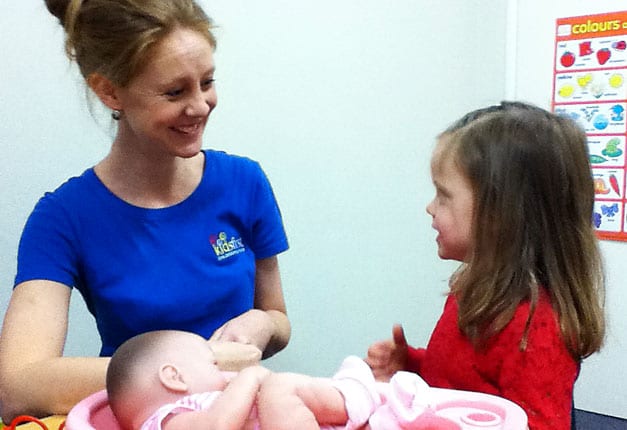 It’s not just speech pathologists who are sharing success stories during Speech Pathology Week, which starts next Sunday, August 19.

Mrs Willment said that she took Cate to speech pathology after concerns were raised about her daughter’s ability to communicate.

“As a toddler, Cate spoke late and didn’t babble as most children do,” Kylie said.

“At the age of two she could only say about 10 words and although Cate has always been a keen and confident child, speech was something that she was hesitant about.”

With Cate about to start school next year, Kylie’s doctor recommended Kids First’s paediatric Speech Pathologist Rebecca King, who has now been supporting Cate for the past 10 weeks.

“We are amazed at the progress Cate has made is such a short period of time,” Kylie said. “When we first took Cate to Kids First, she couldn’t pronounce some sounds and we were concerned that this might affect her ability to learn to read and spell when she starts school.”

“Rebecca identified Cate’s problem straight away and quickly built rapport with her.”

“Cate just loves Rebecca and looks forward to seeing her every week.”

“We’ve been so pleased because Rebecca makes therapy fun for Cate with games and activities that Cate really enjoys. She gives her lots of positive reinforcement and that makes it easy to encourage Cate to practice her talking at home.”

Mrs Willment said that speech pathology has not only given Cate confidence, but has also helped her and husband Rod to make informed decisions for their daughter’s future.

“Early intervention has certainly given us a great opportunity to get the information and advice we needed to make good choices about Cate’s school readiness.”

“We are glad we took our doctor’s advice and consulted a paediatric specialist. It has made a big difference for our child.”