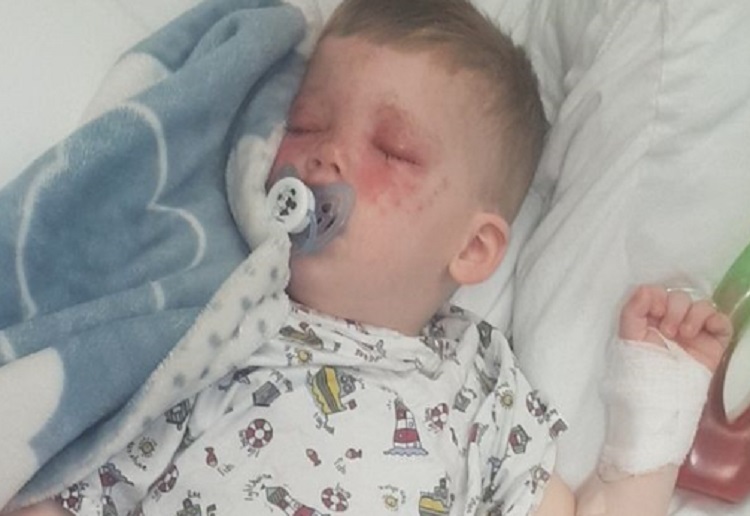 Mum’s horror as a common household product burnt her toddler leaving him looking like an ‘acid attack’ victim and scarring him for life.

A horrified mum has issued a warning to parents after her son was left looking like an “acid attack victim” by a household oven cleaner.

Two year old, Aaron Cadder, was playing in his grandmother’s kitchen when he got hold of the dangerous product and spilt it on his legs, reported The Daily Record.

The corrosive liquid – which is available to buy at supermarkets – soaked through the two-year-old’s trousers causing him to suffer serious burns and a frightening allergic reaction.

Mum Paula said when she first saw Aaron in hospital it looked like his “face had melted” and thought his little one would be left blind.

Paula Gibson, 25, from Glasgow , said: “He was in so much pain and never left my side afterwards.

“It’s just unimaginable that such a common household product could do so much damage.”

“Thankfully Aaron has made a full recovery but he has been left scarred for life.”

Surgeons took Aaron into theatre where he was given a general anaesthetic so they could remove the dead skin and bandage him up.

Doctors revealed he’d suffered a third-degree burn on his left leg which stretched from his ankle to his groin, and he needed skin grafts to repair the damage.

Thankfully Aaron’s face wasn’t burnt by the cleaner – instead, he’d suffered an allergic reaction which doctors prescribed antibiotics and eye drops for.

And three days after the accident, the little tot underwent two skin grafts in a two-hour operation on his legs.

Paula says: “It was awful, I felt constantly sick with worry and couldn’t stop crying.

“After his operation, Aaron was forced to wear a half cast on his leg so he couldn’t bend it and undo the skin graft.”

“He’ll need more skin grafts in the future as he grows but we’re taking it each day at a time.”

Urgent message to other parents

“I want to urge other parents to keep their cleaning products in a top cupboard away from the reach of little ones.

“Now, I’ve got locks on our cleaning cupboard to ensure Aaron and Kelsey can’t get in there.

“You never think it’s going to happen to you but accidents can happen in a split second.”