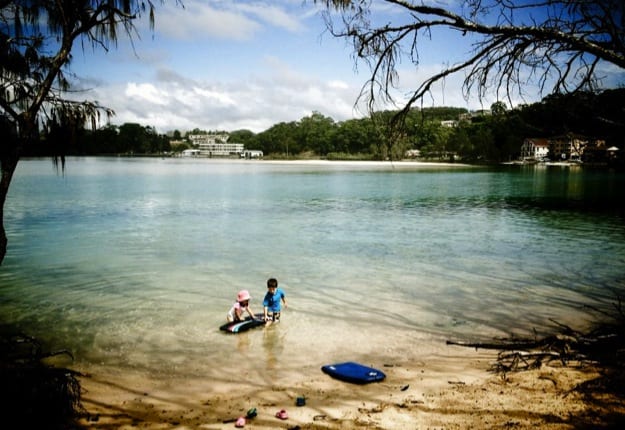 When we organised to catch up with friends for a holiday, it was literally find the middle point between Sydney and Brisbane and that is where we will meet. That middle point was Nambucca Heads. I have been up and down the east coast of Australia before but never experienced the beauty of Nambucca Heads. It was the ideal choice.

We left home bright and early on Saturday morning (5am). My four year old was incredibly excited. We had told the children we were going on a holiday and would be leaving very early the next morning, so early it will still be dark. When I went into his room at 10pm to check on him, he sat bolt upright and said, “Are we going now mum, its dark!” When we actually did wake him up, he was so excited it was infectious. Not only were we going on holidays, we were going to be spending a week with his friends.

The trip was just under six hours and was a fairly comfortable drive. The children slept until around 8.30am at which time we had a quick stop for breakfast and were back on the road. Our friends are experienced campers so the compromise was a surf shack at Nambucca Heads Holiday Park – a Big 4, 4-star holiday park.

When we arrived, Janine and Shaun were so lovely and made us feel immediately welcome. Even though check in was at 2pm, our beach shack was ready – bonus!

I have to say, I really didn’t know what to expect. The park was immaculately clean and well maintained. When we opened the door to our 2-bedroom shack I was pleasantly surprised. Everything we required was there. The beds were made perfectly, all bathroom amenities were provided, clean towels, extra blankets – “wow” I said to myself, “I can definitely do this for a week.”

You see, the honest truth is, I am not the camp-loving-holiday-park going kinda gal. In fact, I have tried to avoid it for as long as possible but in recent years it has been more difficult as the children love it.

However as I quickly found out, it’s really not all that bad – quite enjoyable in fact. Our friends were right next-door. Our shack had three televisions, not to mention air-conditioning! We overlooked the pool and were a 3-minute walk to the beach. Perfect.

Nambucca Heads beach is unbelievably beautiful and we basically had it to ourselves every time we went. The sand was squeaky and white and the water was just the right temperature. The only downside was the weather, unfortunately for us we had three days of rain, which is never nice with five children to manage, but it did force us to explore.

One rainy day saw us heading to Bowraville to explore the little town. When we arrived it was a complete and utter ghost town. It was Sunday and nothing but the local church was open so we decided to head further up the coast to the Big Banana. I remember visiting the Big Banana when I was a child and I have to say, I remembered it being much bigger – but I guess everything seems bigger when you are small.

There was a lovely little candy shop behind the Big Banana where they have candy making demonstrations twice a day. We were lucky enough to arrive at just the right time and it was great to see the candy artist at work. I don’t use the word “artist” lightly. It is extremely creative process and you have to have strong arms to mould and shape the candy into such incredible designs. I highly recommend the rainbow candy stick! It was blissfully quiet for almost an hour and the children were not even close to finishing it. In fact, it would probably take my kids a week to finish this although I wouldn’t let them do so for the sake of their little teeth.

Upon heading back to the Big 4 Holiday Park, the pool area at the Park was a big hit with the children. There was a baby pool with water fountains and the main pool had a shallow beach area, which was excellent as it meant you and the children could swim in harmony. The Park also had a playground complete with jumping pillow, another massive hit with the children.

Our next day trip was to Belligen and Dorrigo to see Dangar Falls. It was an enjoyable drive through the green lush countryside. As we wound our way up the mountain towards Dorrigo, we passed a number of smaller waterfalls and at one point had a magnificent view through the rainforest to the sea. As our ears popped, we entered Dorrigo a beautiful old town, again with hardly anyone in sight.

Unfortunately, just as we arrived at Dangar Falls the heavens opened and the rumble of thunder was shaking the ground (well not really but it certainly felt very close as we were so high). We saw the falls from the lookout but had to abandon the 40-minute walk down to the falls which was really disappointing as they were beautiful and you are able to swim down there. Next stop Bellingen for some hot chocolate; it is a beautiful town that you can wander the streets of.

Overall our first long-haul car drive and Holiday Park experience was a success! Highly recommend Nambucca Heads – whether it’s raining or the sun is shining, there’s plenty to keep the family entertained.