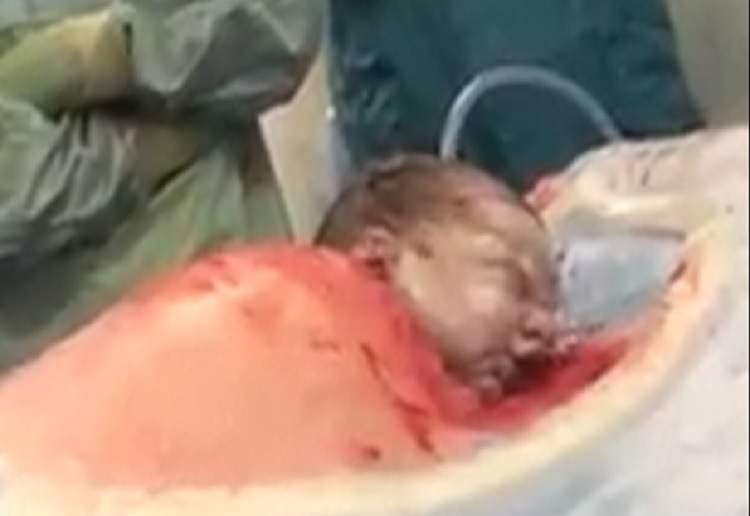 Sophie Messager, a Doula, Childbirth educator, Babywearing instructor and Healer, shared the video on Facebook explaining, “A friend had the most gorgeous gentle caesarean yesterday-it was quite a journey because her local hospital refused to entertain any of her wishes, so she had to move to another hospital where she found the most supportive consultant (Dr Andy Simm at Nottingham City hospital), who not only agreed to support all her wishes but filmed the birth to use it to educate other health pros.

I especially loved watching the baby walking himself out of the womb. The mum also told me that they waited until the cord had finished pulsating before clamping it. For me this really shows how it isn’t how the baby is born but how the people present respect wishes and demonstrate support and kindness that makes a beautiful birth. The mother has kindly agreed for me to share the video so other women can have such a beautiful experience too.

The official hospital film should be released in a week or 2.
These were the mother’s wishes:
* no drapes
* walking out of the baby to help clear lungs
* delivery to chest if cord allowed
* cord left to stop pulsing before cutting
* no weighing or measuring until family ready
* baby to stay on mum until she was ready to part (it was 6 hours). Even when pat sliding to transfer.
* own music
* lights reduced

On top of that, the anaesthetist lifted the mother’s shoulders and someone held a mirror to help view the birth.”

The video has had over 2 million views and 32K reactions with 34K shares.

She shared her video on youtube last year she wrote “I wanted to share this video to show that if you are unable to give birth ‘naturally’ that having a natural caesarean is the next best thing!” Watch her birth here.

What is a natural caesarean?
• It is described as a ‘natural’ approach that mimics a vaginal birth by allowing the parents to watch the birth of their child as active participants
•slow delivery with physiological autoresuscitation and
•the baby to be transferred directly onto the mother’s chest for early skin-to-skin.