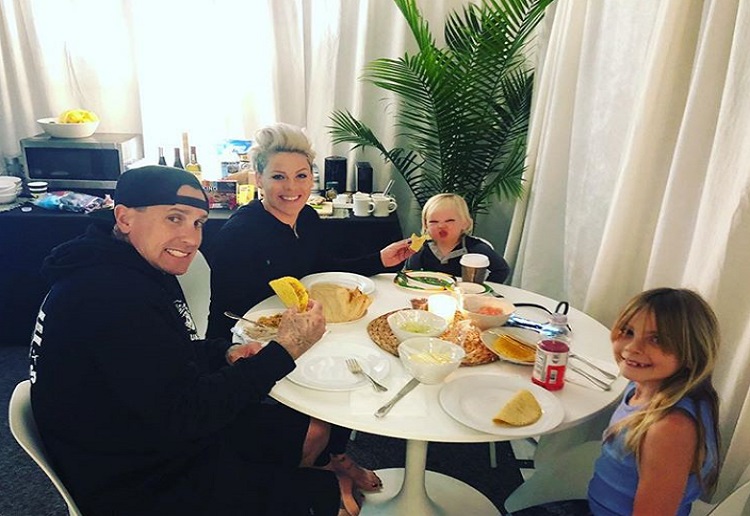 When Singer, Pink, posted a family shot with husband Carey Hart and their two children, Willow, seven, and Jameson, two, as they shared family dinner, she never expected the parenting police to lash out.

“At least twice a week on tour, we shut the door to the outside world and have family dinner,” Pink captioned the picture.

“As you can see, it makes Jameson feel deep, deep joy.”

One follower soon shared her problem with the family snap, commenting: “Except it’s posted on [Instagram].”

Pink certainly wasn’t putting up with that sh#t though, replying: “Yes I like to promote healthy stuff. I also like to remind people to stop being TOTAL D— BAGS TOO.

“Consider this your reminder, f—o.”

Another fan later wrote, “You apparently missed the entire point @megablack921 was making. She talks about shutting the world out for family/dinner time, yet posts about it to her 5+ million IG followers/social media with a picture. It’s a pretty valid point. Typical from an entertainer though, always needing the attention and validation…”

Another said, “Honestly I get where you’re coming from, even if it came off as rude. I mean it’s kind of counter productive to shut the door on the outside world, but post it on a public forum where over a million people will see it.However, I also see what @pink means about trying to post positivity. I hope this comment isn’t taken the wrong way, it wasn’t intended as such.”

I actually love this woman’s confidence and take no sh#t attitude! I think we all need a bit more of that.

At least twice a week on tour, we shut the door to the outside world and have family dinner. As you can see, it makes Jameson feel deep, deep joy. #lastedsevenminutes #gratitude #space #conversation #loosescrews