A family now have an anxious wait for test results after their toddler found a syringe at a bus stop and put it in his mouth.

Kai Rigby, 18-months-old, was with his mother Francie Jones at a bus stop in Port Kennedy, about 60km south of Perth, on Thursday when he discovered the syringe and popped it in his mouth, shares Daily Mail.

Francie Jones said she ‘grabbed it and threw it’ as soon as she saw the syringe in her son’s mouth.

‘I was mortified, I was pretty angry,’ she told Seven News.

‘A split second later and he would’ve been sucking on it, so I dread to think what he could’ve got from it.’

While she took the syringe from her son as soon as she could, Ms Jones said Kai managed to put it in his mouth before she reached him.

Ms Jones said doctors wanted to test her son for a number of diseases including Hepatitis B, which can lead to serious illness and in some cases, death. 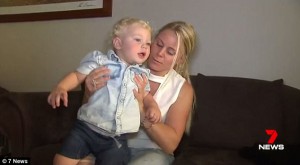 Ms Jones said she was so petrified from the experience, she would never allow Kai to walk barefoot in public again.

She pleaded for people to dispose of their syringes properly, regardless of whether they were used for diabetes or illegal drug use.

‘It could be very dangerous for a little baby, for anyone,’ Ms Jones said.

We hope the tests are all OK!