Article Are Parents to Blame? No One Shows Up to Boy’s Birthday Party 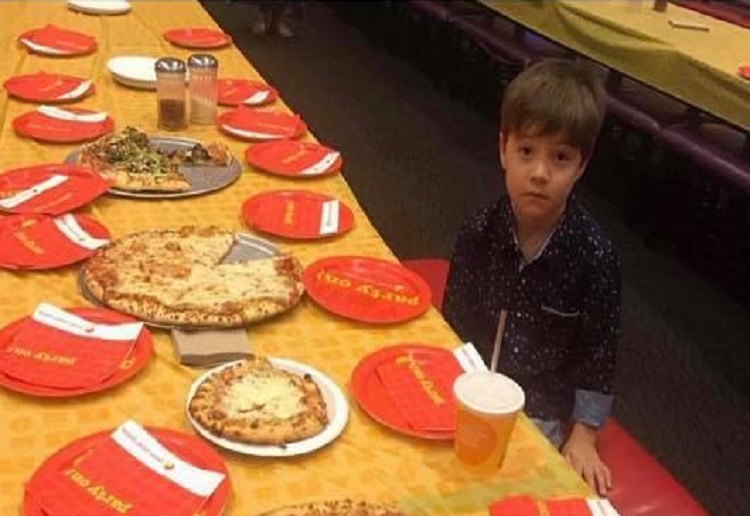 A photo of little Teddy went viral on Tuesday after his mum shared a picture of her son’s heartache after he learned none his friends were coming to his sixth birthday party.

Teddy handed out invitations to 32 of his classmates to last weekend’s party at a pizza restaurant, but none of the children showed up.

The boy’s mother posted a picture to Facebook of a heartbroken Teddy surrounded by pizza and two rows of empty table settings at the restaurant in Tucson, Arizona.

Teddy’s mum told Fox News she had made 32 goodie bags for him to hand out to his classmates with an invitation to his party, and she even spoke to some of the children’s parents who said their children would come.

But in a heartwarming development, two professional sporting teams have stepped in to cheer Teddy up.

The Phoenix Suns NBA team have gone above and beyond for the heartbroken six-year-old whose classmates ditched his birthday party.

The picture caught the attention of the Phoenix Suns and Phoenix Rising soccer team, who offered the birthday boy free tickets to celebrate with them at upcoming games.

The Suns welcomed Teddy and his family to watch Wednesday’s game (local time) against the LA Lakers, while Rising’s vice president said Teddy will be at Friday’s game.

How about we celebrate with thousands at our place! Tickets to Wednesday’s #SunsVSLakers game are all yours Teddy! Talk soon! https://t.co/YL3zjDX9JW

Do you think the blame falls on parents or the kids for not committing to the little boys party?