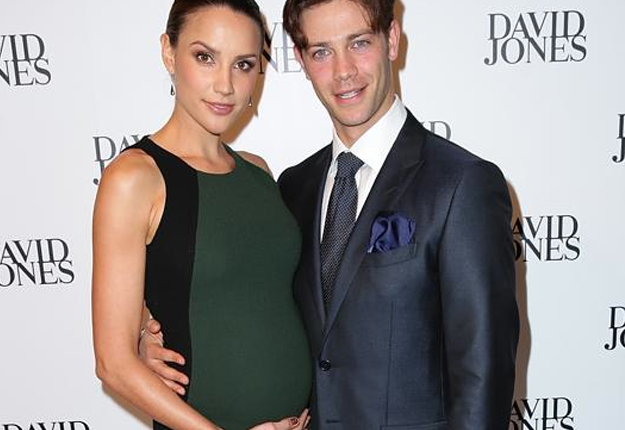 Former Miss Universe Australia Rachael Finch has given birth to a baby boy on Sept. 24. “Michael and I are excited to announce the arrival of our first child,” she said in a statement.Finch, 25, met her dancer husband, Michael Miziner, when partnered with him on Dancing with the Stars in 2010. They married this January and announced her pregnancy shortly after. “We didn’t know at the wedding, but we were about a week pregnant,” she told New Idea. “But it was definitely planned. Kids have always been on our minds, before we even met.”Fans have been tracking the pregnancy progress through Finch’s social media. The excited model and TV reporter has posted underwear images revealing her growing bump and on Sept. 21 tweeted to a friend, “Still waiting … Someone is snug as a bug in a rug!”

With one week to go before her due date, the dedicated cook (she made the semi-finals of Celebrity Masterchef in 2009) wrote of her pregnancy experiences on her website: “I thought having bigger boobies would be fabulous but I can’t seem to sit at home without a sports bra on anymore. My nose runs like Niagara falls at the hint of certain scents, I’m laughing one minute and balling the next and I’m starting to think I could write a best seller with the wacky dreams I’ve been having.”

Still, “Oddly enough labour excites me and I look forward to the challenge that awaits. That may change in a few daysbut something I am sure of is without even meeting ‘it’ yet there’s a love that goes far beyond heartbeats and kicks.”

The name of the boy, born nine days after his due date, has not yet been released.