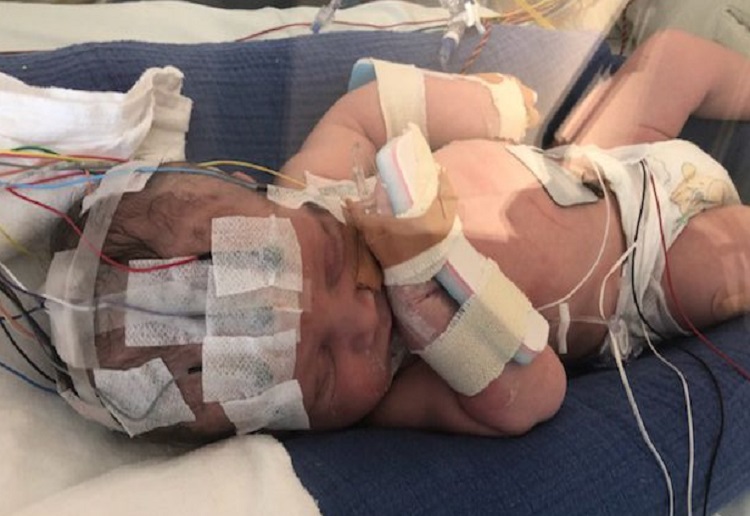 The moment 23-year-old mum Jessica Hill, from Sydney, held her baby boy for the first time, she knew something wasn’t quite right.

It was discovered after five days of tests that her baby boy, Khynan, had suffered a stroke at just one day old.

“When he was placed on my chest he was very limp, didn’t have much colour, wasn’t crying or making any noise,” Jessica told Yahoo7.

“He came good after a couple of minutes and seemed to be OK. The doctors saw he was having some difficulty breathing, so they monitored that while we were in the birthing unit.”

After being sent up to the postnatal ward, Khynan spent a “very unsettled” night, Jessica said.

In the morning, doctors were concerned about his breathing and took him into the neonatal intensive care unit.

After a series of blood tests, Khynan was diagnosed with an infection, but then he began having seizures. An MRI on day five revealed he’d had a stroke.

But it only happens to old people!

“The news was a massive shock to the system,” Jessica said.

Doctors have not been able to pinpoint exactly what causes strokes in newborn babies.

“With Khynan it was a blood clot that travelled to the brain, but why that actually happened is not clear,” Jessica said.

Now six months old Jessica said, “It was a pretty significant stroke, it wasn’t a small one, so we were told it could affect his development, from sitting to crawling and walking, his speech, feeding, eyesight, hearing, everything.”

“At the moment he has physiotherapy and occupational therapy every week and he is slightly delayed in the use of his right arm and hand.

“We’re really trying to concentrate on building his strength up, but with everything else it’s really just a matter of waiting for certain milestones to see how much it’s affected him.”

As part of National Stroke Week Monday 3 to Sunday 9 September 2018, Jessica said she hoped her experience would raise awareness that strokes can affect babies and children, not just the elderly.

“There wasn’t a lot of information for us as parents,” she said.

“Every time I tell someone what happened, they’re so shocked that it happened to a newborn.

“It needs to be talked about more – if we can just start a conversation about it, that’s a good thing.”