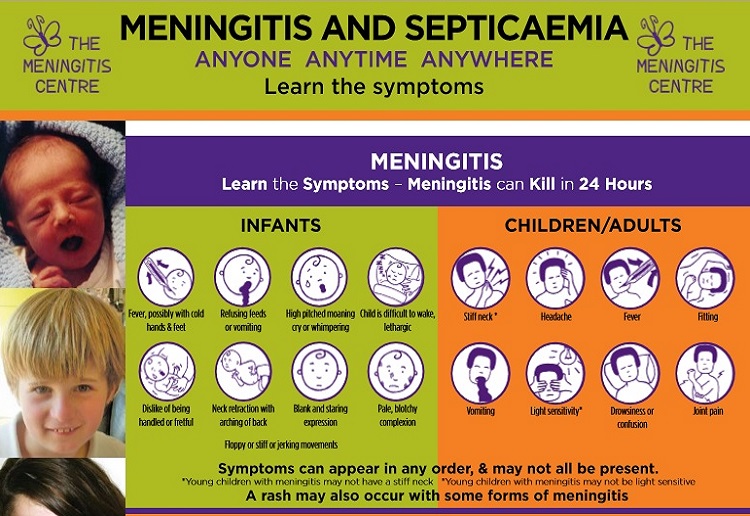 A baby girl sent home from hospital with ‘chicken pox’ is lucky to be alive after battling the most deadly virus.

Lily was given just a 20 per cent chance of survival after being diagnosed with life-threatening meningococcal septicaemia and rushed to Barnet General Hospital’s A&E.

She battled the disease for five days in intensive care on a ventilator with her anxious mother and father facing an agonising wait to see if she could beat the odds to pull through.

She is still being treated for the after-effects more than a month later.

Today Mrs Hicks, a veterinary nurse, said: “We went to the cinema as a family and Lily was asleep on my lap for 40 minutes and I noticed she was not herself and not the happy girl she usually is – she was shivering had a high temperature and was breathing with a moan.”

‘We arrived at A&E at 7.30 at night and I spotted three red non-blanching spots on her back. 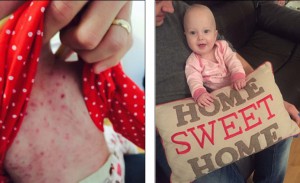 ‘But the paediatrician was not concerned and sent us away at 2.30 in the morning after telling us it was chicken pox.’

But the next morning, Lily deteriorated and within about 20 minutes of waking up, she was covered in an angry purple rash on her back. 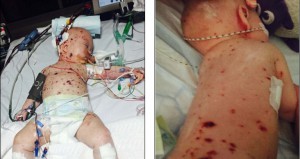 ‘No matter how strong you think you are or what you have had to deal with in life, nobody can prepare you to hear a specialist doctor tell you that your baby girl might die right here on this table.

‘It was only on the fourth day that doctors started to speak more positively.’

Lily spent five days sedated and on a ventilator as she battled the disease before returning to Barnet General Hospital where she recuperated and was released after a two weeks of treatment.

Just this week we shared the story of Claire and Mark Timmins’ son Mason who died of Meningitis two weeks before Christmas.  They released pictures of their son’s dying breaths as a warning to others about this terrible illness.

The couple have said – “Hopefully it will shock people into finding out more about meningitis. We want people to know just how quickly it can happen.”

Their son, Mason, didn’t develop a rash but woke up vomiting one morning and fell asleep watching a children’s TV show before he developed a temperature. 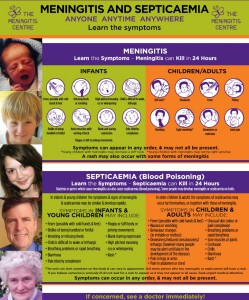 Symptoms of meningitis can include via The Meningitis Centre:

Things to remember
•Bacterial meningitis is serious and requires very prompt medical attention.
•Different germs can cause meningitis.
•Viral meningitis is relatively common and may also be serious.
•Vaccination can protect against some forms of meningitis.