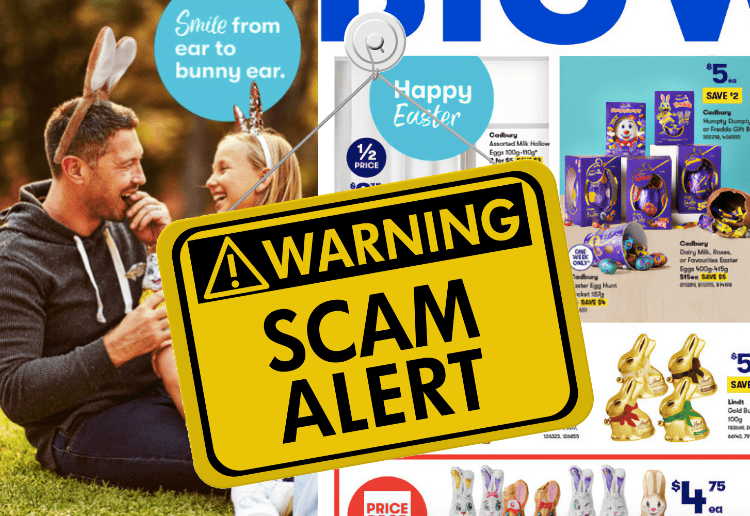 You thought you would falsify your ‘savings’, and that I wouldn’t notice, but guess what – I most certainly DID!

This year I decided to invest in my Easter Eggs early, due to being burned by Kmart last year. It was also one of the deciding factors when I chose to give you my sale, opposed to Kmart.

I don’t put all my eggs in one checkout basket – not just because of the good old saying, but because I know that the items I need, go on sale at different times, so I only purchase whatever is on sale at the time and wait for the next product to be discounted.

Last week I purchased Cadbury hunting eggs from you because I needed some for school. They were on sale, and I thought I may as well get all that I needed for school as well as for my little ones.

They were only around 20% off, which wasn’t really as good as your 40% off sale, but at least they weren’t full-priced.

Thank goodness I did! Because only FOUR DAYS after I made my purchase you launched your 40% off sale on the exact SAME product. And guess what folks – they were MORE EXPENSIVE than what I had paid for them at only 20% off!

How can you do that to people?!? Do you honestly think nobody notices?!? Because in the age of screenshots not only is it possible to notice these things – but it’s easier than ever to PROVE it!

It IS A Big Deal

Of course, this isn’t going to seem like a big deal to most. But to those who purchase these Easter goodies, we are talking a significant difference to their hip pockets!

You need to remember that these chocolates, by weight, are already HEAVILY OVERPRICED! But then when you claim to have a 40% off sale and actually INCREASE the price that consumers are paying for the items that they could have bought for LESS at only 20% off, it’s absolute robbery!

Yeah sure, I don’t ‘need’ to buy them if this is the way I feel about them. Except I do, because I’m a mother… who’s addicted to chocolate and I use my children as an excuse to purchase copious amounts of it. But this is beside the point!

Irrespective of whether or not I buy it, claiming that ANYTHING is 40% off when it really ISN’T is ludicrous! No matter what it is. And yes I know that all companies probably do it and we as consumers are responsible for taking note of things like prices before, during and after-sales. But it still doesn’t make it right. It still doesn’t make it acceptable. When it’s done by a business which always comes across as so trustworthy and family-friendly, when THEY do underhanded things like this, it makes me question why they would do it knowing it’s being done to FAMILIES buying necessities more often than not – opposed to say a limited edition designer handbag.

What just happened over the last four days from when I purchased them to now? Did the value of chocolate go up or something? I know that sometimes happens with limited edition chocolate, but hunting eggs?! Seriously!?!

I’m disappointed Big W. Extremely disappointed! If I had left my purchase until today it would have meant the difference of $18 out of my pocket!

Eighteen dollars may not seem like much – but it’s equivalent to a box of wipes and a packet of nappies! Or even a tray of steak! So why would I want to just hand it over to you for absolutely no reason other than the fact that you’re having a 40% off sale and because of this you feel the need to jack up your prices?!

Don’t Fall For It!

Thankfully I work off a ‘price per egg’ system and I had a rough idea how much I spent per egg last year, so when I calculated the price during your 20% off sale and it wasn’t too far off, I went for it.

Shoppers, for goodness sake, if you want genuine savings please take note of the price of what you want BEFORE it goes on sale and throughout its sale stages.

If companies can do this with something as simple as chocolate during the time of highest demand for the product- what else are they doing this with?

Just because an item is on ‘sale’, clearly doesn’t mean that it’s cheaper! Have you had similar experiences like this with Big W, Kmart or any other stores? Tell us in the comments below.