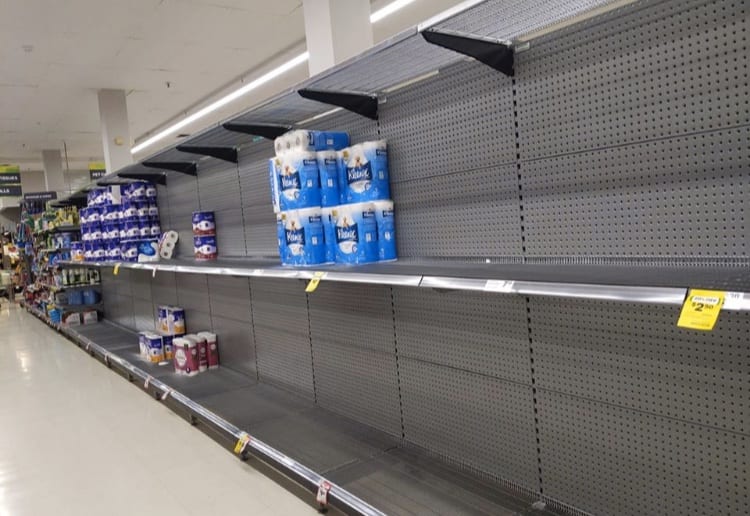 My husband laughed as he described his mother in hysterics about toilet paper during a phone call he had received at work from her.

Although she was overseas enjoying her holiday, she was deeply concerned about the toilet paper shortage in Australia.

In fact, she was panic-stricken even though she would be on holidays for a further three weeks and the country she is in wasn’t experiencing any shortages!

Her greatest fear was that my family, having nine members, would be running low on toilet paper.

…and that my husband would go to her house and STEAL SOME OF HER SUPPLIES!

She made it very clear to him that under NO circumstances was he to do such a thing- no matter how desperate we became!

Her worry over something as trivial as toilet paper during a time when she should have been focusing on enjoying herself was absolutely hilarious to my husband and admittedly I could see the funny side too… but the underlying message was still undeniably hurtful.

I Buy In Bulk BUT I Do Not Panic Buy!

As a mother of seven, I do buy in bulk. I have done so for years- it’s not “panic buying”, it sure as heck looks like it, however it’s just a basic big family shop.

Most people who know me know I do this. And over the years my in-laws have benefited from my bulk buying by being able to rely on me if ever they run out of toilet paper!

Had my mother-in-law magically forgotten all of those times?

Or was she just genuinely stressed that in three weeks time when she returned home, Australia would have completely sold out of toilet paper…

Either way it didn’t really sit well with me that she assumed we would even consider stooping so low as to steal toilet paper from her home!

Besides, at the time of her hysterical phone call, I was in denial that there was even a toilet paper crisis happening around me.

I thought it was a marketing ploy to get shoppers to spend more money on silly things.

Then I blamed the media saying that they were just creating hype and a reason for shoppers to panic.

But I remained positive and eventually, we were able to buy some!

Two weeks after my mother-in-law’s firm warning to stay clear of her toilet paper, my husband received another phone call from his mother in hysterics.

It was close to midnight…

She Wanted To Come Home!

And she wanted to come home, a week early and needed his help to get her back to Australia!

The situation got me thinking about the horrible experiences so many people have had over something as simple as toilet paper!

And it made me wonder- would people still hurt someone over something so basic, if they knew that one day they would need that very person’s help?

Would they still display a lack of compassion if that human being they were just so incredibly unkind to was their ticket home?

The toilet paper shortage is only temporary, but the memory of how you treat someone can be long-lasting!

Nothing lasts forever, so please, be kind with your words and your actions as you never know when the tables could turn…

It seems incredibly ironic that once my mother and father in-law arrive back in Australia, it will be my family that has to do their grocery shopping during their mandatory two week self isolation period… I wonder if she will reflect on the fact that during those two weeks we most certainly will be sent on a wild goose chase so that she doesn’t end up running out of the very item that she didn’t want to share with us!

… and wouldn’t it be crazy if we couldn’t source any for her!

If that were the case I’m curious if it would mean that she would expect me to share my supply with her as I have been over the years?

I guess only time will tell… but I know that one thing is certain, I wouldn’t want her to experience the selfishness that we have been shown…

Are you fed about the lack of humanity during this toilet paper crisis? Tell us in the comments below.