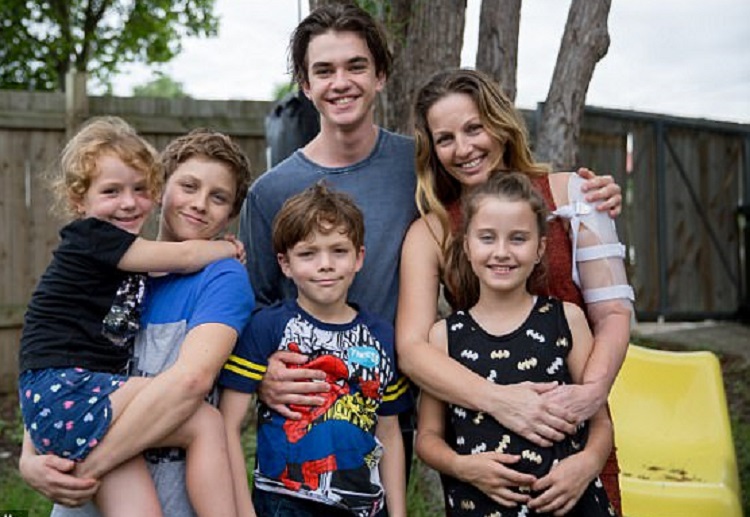 Children jump to mums defence after she was shot in their Brisbane home by her former partner.

Rachael Moore and her five children were getting ready for bed on April 11, 2014, when they heard Daryl Fields pull into the driveway.

Eldest son, Jayden Caulfield, 17, said his drunk stepfather kicked down the door of the bedroom they had hidden in, stared at them and then went to get a shotgun, reports Daily Mail.

‘We all pleaded with him not to do it for a while but then he pulled it up, cocked it and shot mum in the arm,’ he told AAP.

The children risked their own safety to save their mum.

Cameron Caulfield, 15, told AAP he hit Fields in the stomach and wrestled the gun out of his hands.

‘I wasn’t even thinking, more instinct took over,’ he said.

Jayden then had to stop him from strangling his mum and gouging her eye out.

‘There wasn’t really room to be scared,’ he told AAP. ‘We just had to get it done.’

While he was wrestling with Fields, 12-year-old daughter Kaylea Caulfield took her mum outside.

Zane Fields, who was just four at the time, hid his youngest sister Samantha Fields under the bed until police arrived and took their dad away.

It was these acts of courage that resulted in four of Ms Moore’s five children being announced on Sunday as the recipients of Australian Bravery Awards.

Jayden said it was an honour, but he also wanted to use the recognition to help other children subjected to domestic violence.

‘One thing that really helped me out in particular was counselling,’ he told AAP.

‘It’s mostly young boys and men who don’t want to do it because they’re like ‘that’s for weaklings, I don’t need to do that’.

‘You don’t realise until three sessions in that actually you’ve got a problem and they work with you and start making it better.’

Ms Moore said she was proud of her children but sad they had to endure such a traumatic experience.

‘They’ve had to take on so many other things around the house I can’t do.’

Ms Moore has had 36 operations on her arm since the shooting, but she remains permanently disabled and likely requires more surgery.

The Brisbane Supreme Court heard during Fields’ sentencing in October 2016 that he intended to shoot Ms Moore in the chest, but she moved before he fired.

Fields was sentenced to 12 years’ jail for her attempted murder, but he will be eligible for parole after serving eight.

Ms Moore said more support services like removalists and people to help with pets were needed for women who were victims of domestic violence.

But she also urged parents and authorities to pay more attention to children.

‘Parents need to be looking and listening to their children when they’re scared,’ she told AAP.

‘Their voices need to be heard.’