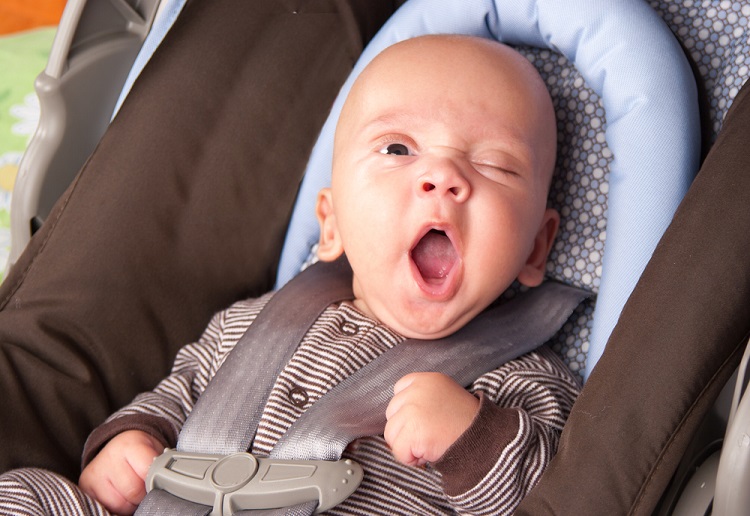 Road transport accidents remain a leading cause of death, with between one and two in every 100,000 Australian children dying on our roads each year.

There is no doubt using a restraint protects against harm during a crash. In Australia we have seen steady declines in death and injury among children in cars since the late 1970s, when laws requiring children to buckle up in cars were first introduced.

One in every two restrained children travelling in cars in NSW has at least one error in how the restraint is being used.

The physics of car crash survival

Modern vehicles are designed to reduce crash forces on occupants by absorbing some of the crash energy. Restraint systems protect passengers in crashes by effectively tying them as tightly as possible to the car. This prevents excess movement, and allows passengers to make the best use of safety features built into modern cars.

These features aim to ensure that in a crash, passengers come to a stop over the longest possible distance, reducing the force and therefore risk and severity of injury in a crash.

But in tying the passenger to the car, it’s important the forces applied to the body are distributed over the strongest parts of the body, and that the motion of the body is controlled. This is where design of child restraints comes in.

Laws were introduced across Australia in 2009 and 2010 that stipulated the exact type of restraint that should be used by children of different ages. The laws vary slightly from state to state, but generally these require:

Since then we’ve seen improvements in the numbers of children using the right type of restraint.

While there has not yet been any rigorous evaluation of the impact of these laws on crash injury, they are linked with a reduction in fatalities. Figures from the Bureau of Infrastructure, Transport and Regional Economics show that before the new laws, on average, about 70 children died every year in Australia in car crashes. The average number of child passengers dying each year is now around 40.

To get the best possible protection in a crash, restraints need to be used correctly. One in every two restrained children travelling in cars in NSW has at least one error in how the restraint is being used.

There are three broad types of errors that occur when children use restraints:

Errors are often present even when parents are confident in their ability to correctly use restraints. Sometimes parents are aware of the errors, but don’t realise the potential negative impact.

The latter commonly occurs when the harness (or seat belt in a booster seat) is not used correctly either because the parent has not secured the child correctly or the child removes their arms during travel.

The new laws of 2009 and 2010 have been followed by a slight increase in correct use of child restraints. In children aged two to five years in low socioeconomic areas of Sydney, we saw correct use increase from 36% to 47% in 2010, just after the introduction of the new laws.

Restraint Fitting Stations, and restraint fitting check days run by local governments and safety stakeholders can help parents make sure restraints are installed correctly, and can also provide advice about how to correctly secure their children within restraints.

We have found that children of parents who had not used these services were twice as likely as other children to be incorrectly restrained. But these services can’t be on hand to check restraints every day when parents need to move children between cars or when the restraint settings need to be modified as children grow.

Information supplied with child restraint systems should be be user friendly – for all users, including those with lower levels of English literacy. Restraint systems must also be easier to use. Many current restraints are not intuitively easy to use, and sometimes physically difficult to use correctly.

As child safety advocates we need to shift our focus again. Instead of focusing on encouraging parents to use restraints correctly, let’s focus on working with industry to ensure information supplied with child restraints is comprehensible, and to improve restraint design so they’re actually difficult to use incorrectly.

For more information on how to choose the right restraint type, and to use it correctly see Child Car Seats