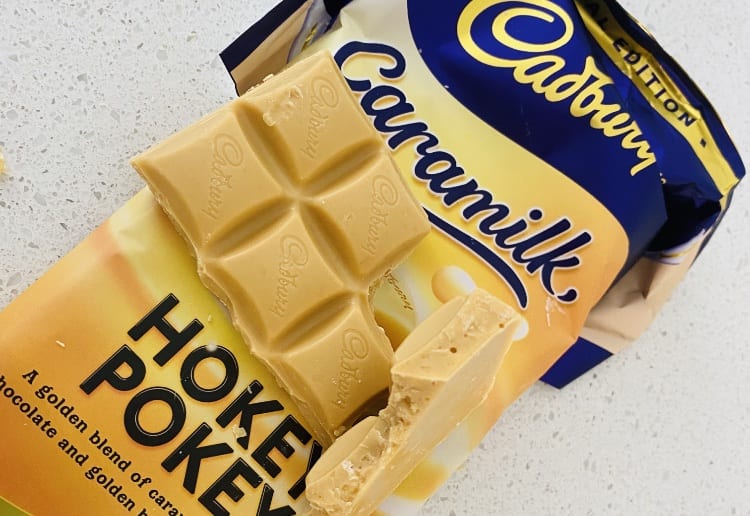 It’s a bit of a mystery really. We were devastated when we discovered that the new Cadbury Caramilk Hokey Pokey was staying in New Zealand. But now this sought after treat has popped up in a few spots in Australia, without even a hint of pomp or fanfare.

I’m confused! If I ran a multi-billion dollar confectionery company and my consumers are screaming for a new product to be released, boy would I do it a second. I’d fill the shelves of the local supermarket and shout out about the launch so the whole world would know about it.

So, I’m a bit baffled about the strategy of the powers that rule Cadbury. The chocolate company was initially quite adamant that the “golden blend of caramelised white chocolate and golden hokey pokey pieces” would not appear in Australia.

WON’T ‘Officially’ Be Launching In Australia!

However, Kate Watson, Cadbury’s marketing manager did tease us with the following statement:

“While Caramilk Hokey Pokey won’t be launching in Australia this year, we’d love to hear if it’s a flavour combo Aussie Caramilk fans would like to see us launch in future.

“In the meantime, we’ll have some good news to share with Cadbury Caramilk fans in Australia very soon.”

Now, this was back in June this year and so far, we’re still waiting for that ‘good news’.

BUT Caramilk Hokey Pokey has mysteriously popped up in various locations across Victoria And Queensland.

Caramilk Hokey Pokey has been seen at a BP in Malvern, Narre Warren and Croydon in Melbourne, as well as in Woolloongabba in Brisbane. There have also been reports of Caramilk Hokey Pokey at IGAs in Ipswich and in the Gold Coast suburbs of Surfers Paradise, Parkwood and Coomera.

I’ve scoured the whole of NSW (well, almost) but haven’t been able to find a hint of the new Cadbury block anywhere. 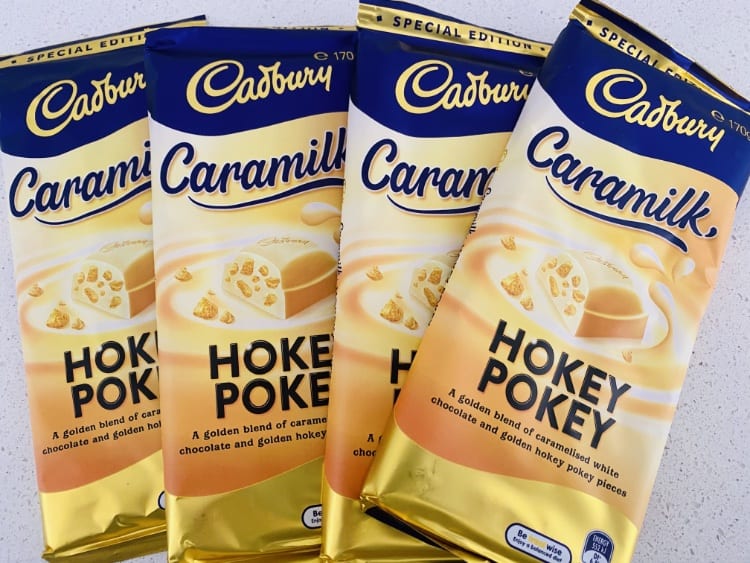 How To Get Caramilk Hokey Pokey

So I had to take matters in my own hands. The Caramilk experts have recommended that fans should go to the source of the chocolate goodness – New Zealand. So I ordered a few blocks from Kiwi Corner Dairy, an online shop designed for Kiwi expats living overseas. I managed to score a few blocks of the sought after Hokey Pokey for about $5 each. I also added a few more interesting goodies that we don’t get over here.

It took a few weeks for the shipment to arrive but the wait was well worth it. I opened up the block and gave it a taste. Oh wow, it was pure heaven for my tastebuds. If you are a Caramilk fan, Hokey Pokey just takes things up to a new level of taste sensation. I love the combination of the smooth caramelised chocolate studded with crunchy honeycomb bits. Sublime!

We predict that Cadbury will eventually launch the new Caramilk Hokey Pokey nationwide, but in the meanwhile, I’m just going to savour every bite.

Have you managed to get a block of Caramilk Hokey Pokey yet? Tell us in the comments below.