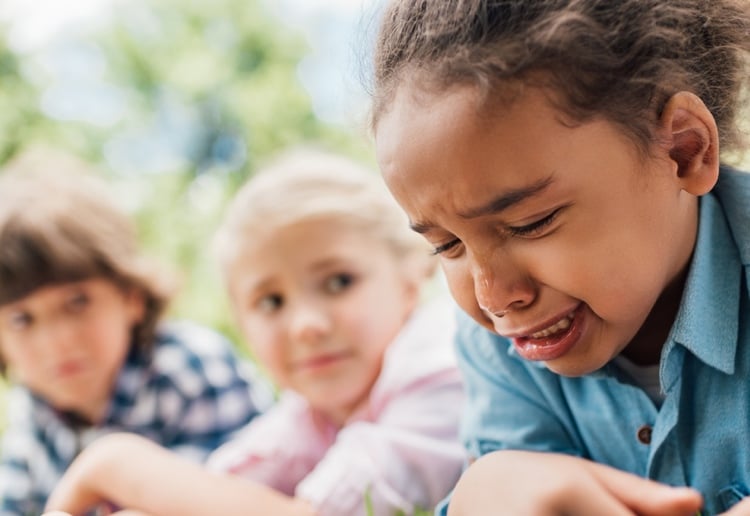 Easter Egg Hunts are all the rage. Pubs, restaurants, and cafes all over Australia have cottoned on to the fact that offering free Easter egg hunts attracts the crowds…and with that hungry customers. But in many cases, these egg hunts are not cracked up to what they promise and leave a stink of bad publicity, empty baskets and hysterical kids in their wake.

I remarked to my hubby that we could spend the whole Easter weekend egg hunt hopping….but after one organised free hunt, we were left traumatised and egg-less and very unhappy. I get that the egg hunts are generally free so maybe I shouldn’t expect much. But really, if you’re going to host an event (even if there is no charge), make sure it’s well organised and that you have enough chocolate loot for all the kids.

It was a gorgeous day at Watsons Bay, on Sydney’s eastern beaches and hundreds of kids milled around the crowded pub waiting for the Easter bunny for the ‘alleged’ hunt. I say ‘alleged hunt’ ’cause once the kids were directed to the park opposite the pub, there were no eggs to be hunted. The Easter Bunny obviously did not get the memo of how an egg hunt works because he pretty much ran around the park hurling tiny eggs into the air while kids scrambled all around him and chased him like the Pied Piper. It would have been quite comical to watch from a distance but if you had kids in amongst the throng, it was anything but funny. And within minutes, the clearly harrassed bunny showed the crowd his empty basket and after posing for a few pics couldn’t hop away quick enough. I don’t blame the rabbit for scarpering – there were a lot of grumpy kids and angry parents in lynch mob mode.

Thank goodness there was a friendly Watsons Bay Hotel staffer hanging around with a satchel full of eggs which she distributed to the disappointed kids.

It’s Not About The Chocolate

Don’t get me wrong – it’s not about the chocolate! You can buy a whole bag of mini Easter eggs for a dollar or two. It’s about the adventure, the thrill of the hunt and having something fun to do with the family. But of course, there’s no point having an Easter egg hunt if there aren’t any eggs to be hunted and these popular spots have messed up in an egg-streme way.

Another egg-ceptional Easter disaster happened at the Grounds of Alexandria – a popular, trendy and supposedly family-friendly cafe in Sydney.

The egg hunt was advertised as a massive collaboration between the cafe and Cadbury’s with a promise of 15,000 choccy eggs being hidden throughout the garden and laneways for eager egg hunters to find. Well, organisers were left with stinky egg on their face as customers took to facebook to express their intense disappointment.

According to the facebook comments, the hoards of kids crowded along the busy road waiting for the egg hunt to begin – which was supposed to get started at the crazily-early time of 8:30am. 20 minutes late to start, the eggs were scattered around the entry and the first few lucky kids nabbed them all. It was all over in 10 minutes and kids were left egg-free and traumatised by the sheer crowds.

“It was a great plot to get a whole lot of hungry people in that place at one time but when you see the people who had massive buckets full of eggs running for the exits once they were done just proves its all a shamble,” said one angry parent.

Many parents joined in the criticism with some saying that they were disgusted by the parents of a few kids who had bucket-fulls of eggs making a hurried hop to the exit, while hundreds of other kids went eggless.

“Shame on the greedy kids and their parents who let them behave that way! I saw a young child with a really full basket of eggs with his mother desperately searching for more! Disgusting behaviour,” remarked a disgruntled parent.

What made it even worse, was that customers had to register for the event but apparently the venue didn’t even check for tickets – which totally defeats the point of this kind of control.

We say charge for these events! No parent would have an issue paying $5 or $10 for an egg hunt, as long as it was well organised and their kids could actually get an egg or two. Many professionally-organised hunts are divided into session times and each session is number-restricted to avoid crowds and chaos. Grounds of Alexandria should learn from their mistakes and try this tactic next year.

The Grounds Of Alexandria responded on their facebook page with a prompt apology:

“An Easter egg hunt without any Easter eggs. Kinda like Christmas without presents, Halloween without treats (or tricks) or peas without carrots. We never anticipated the amount of people that would attend our Easter egg hunt today and a lot of people left angry and disappointed…and most importantly kids left without chocolate.

To those we disappointed, we apologise from the bottom of our hearts and would love if you reached out to us with your details so that we can make this up to you.”

A parent has replied that the Grounds had promptly delivered 2 bags of Easter eggs to their house as a way of apology.

It may take them a little while to hop back from this eggs-plosive egg hunt.