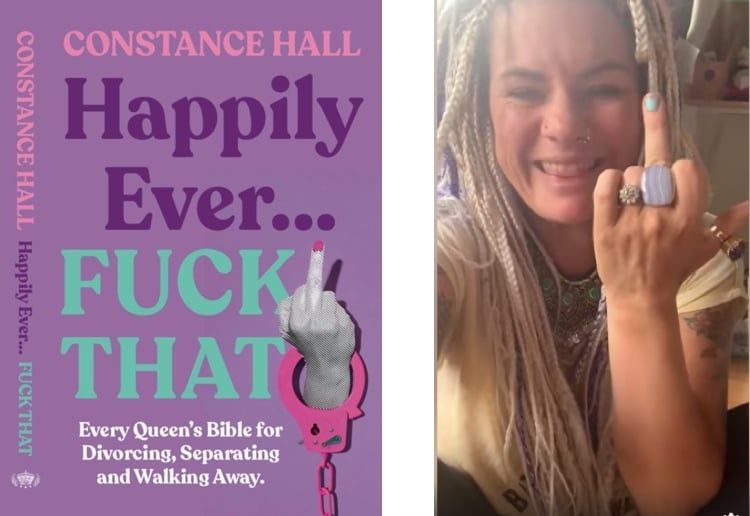 Love her or hate her, Constance Hall certainly knows how to tap right into the heart of her besotted followers. And the controversial blogger/author/fashionista and astute businesswoman has launched her new book, a guide on how to survive separation and divorce.

You can’t help but admire Constance Hall’s rawness and honesty and her ability to connect with her fellow ‘Queens’. Her openness and crass language have also created a band of trolls and she has often lamented the effects of her vicious opponents on her mental health.

Sharing her own stories has created an open door for women all over the world to unmask their sadness and traumatic experiences. A few months ago, Hall called out to her fans to share their stories and the cult author’s new book  “is a compilation of a lot of women’s stories of divorce,” as she explains on her facebook page.

The Birth Of The Book

In May this year, Hall posted on her facebook page:

“I saw my girlfriend, she was devastated. Her husband had left her for another women.
“I don’t want to be a divorce” she said.
And it occurred to me. The media has portrayed divorcees in the wrong light.
I mean, I’m jealous of my divorced mates. They are living their best lives, like some kind of a mod life second wind. I was living vicariously through them.
That’s when I realised, I need to write a short book, a bible for the newly divorced, something you can buy them for the divorce party. And I’m naming it “Happily Ever Fuck That.”
And I want your stories.”

Now that the book has been published Hall says:

“Receiving thousands of submissions, intimate stories of love and loss and empowerment has been eye-opening.”

And this was a catalyst for Hall to compile these stories into an in-your-face book called: “Happily Ever…F*ck That”.

She describes the book as “Every Queen’s Bible for divorcing, separating and walking away”.

What It’s All About

“Happily Ever…F*ck That” has been written for “all the misunderstood legends that could change your whole opinion on getting chucked back or plonking yourself back on the shelf?”

Hall explains: “The realities of separation are so much more heart wrenching, exciting, scary, fun, lonely, hilariously unethical and X rated then what we see from the outside looking in.”

“This is the book that empowers the separated. I f*cking hope you guys love it,” Hall said on a facebook post introducing her book.

She has bundled an incentive with the book saying that the purchase will “come with access to a closed group of all separated, divorced, legendary Queens dancing their arses off on that shelf of ours.”

Fans have responded with uproarious praise to the announcement of the new book, with many admitting that this book has been written specifically for them.

“This is just the read I need right now. So raw out of a separation.

I hope to regain that strength to go on.,” one fan said.

“I can’t wait for this book. I need it to give me the strength to walk away from a narcissist right now,” another admitted

“I so need to read this right now to give me the strength I need to make a decision. Who knows what my future will hold,” read a comment.

And those that are still happily married?

The true fans will still buy the book, it seems.

“I’ll have to explain to my husband that I just love your books and to not be concerned by the title when he sees me reading it.” said one loyal follower.

This is Hall’s third book, following on the bestselling success of “Like A Queen” and “Still A Queen”. She also sells a variety of fashion, accessories and skincare products on her online store.

There is no launch date specified for the book but it’s ‘coming soon’, according to Hall’s facebook page.

Are you a Constance Hall ‘Queen’? Do you follow or unfollow her or have never heard of her? Tell us in the comments below.