Article Dad Names Newborn Baby While Wife Is Passed Out 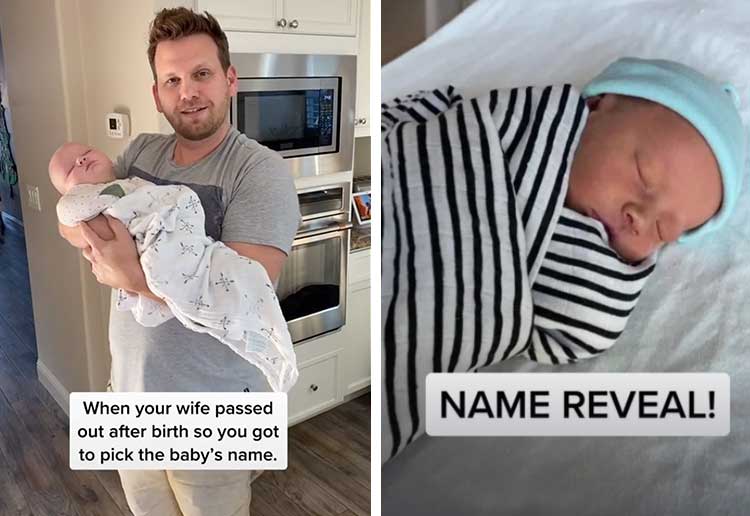 A dad has admitted to choosing his son’s name while his wife was ‘passed out’ after a difficult labour – and it’s ignited a heated response.

Jeff Weiss posted a satirical video on his family’s TikTok account. He mimes a scene from the movie Superbad, where the character gets a fake ID and is mocked for the ridiculous name he chose.

The video has the caption: “When your wife passed out after birth so you got to pick the baby’s name. This is actually how we ended up with our baby’s name.”

@theweisslife This is actually how we ended up with our baby’s name.???? #babynames #babyname ♬ I uploaded this sound when it was music.ly lololol – Mackenzie Jewell

The video has had more than nine million views, and thousands of irate comments. “I don’t get how Ur laughing… I’d be absolutely furious,” commented Gianna.

“I would be SO mad,” said Jade. “The baby’s name can wait until I’m back awake, cause if I just went through all of that I’m fkn naming him.”

It prompted Jeff’s wife Melissa, to follow up with her own video, explaining how their sixth baby was actually named.

“A lot of people were pressed in the comments about how could I let my husband name the baby while I was out of it or passed out ow whatever, so I thought I’d give you guys more info about it.”

She explained that her sixth pregnancy had been high risk, so she had an emergency induction at 38 weeks.

“During my labour I was on all sorts of drugs. I was so out of it and so loopy and the labour lasted for days and and it was terrible. And then when the baby came, he had to go to the NICU right away, so Jeff went with him while I was with the doctors and nurses and they were trying to take care of me.

“So six hours later, I mean literally after having him I passed out and we were reunited. And Jeff comes in with Jagger and says, ‘I think his name should be Jagger, I think it fits him.’ And I was still really loopy at that point in time because the drugs took forever to wear off so I didn’t really know what to think.

\”While we had discussed it, it definitely wasn’t at the top of our list. So basically we were in the hospital for a week anyway. We thought about it for the next couple of days, I got to spend some time with the baby, meet the baby, kind of feel it out and we both ultimately decided that that was the best fit for him.”

For the record, the couple’s other children are named Gemma, Gracelynn, Gwyneth, Gabrielle and Gretchen.

If you’re trying to decide what to name your bub, make sure you head to our article with 782 unique boy names.