Article Dad raises millions to give back after family tragedy 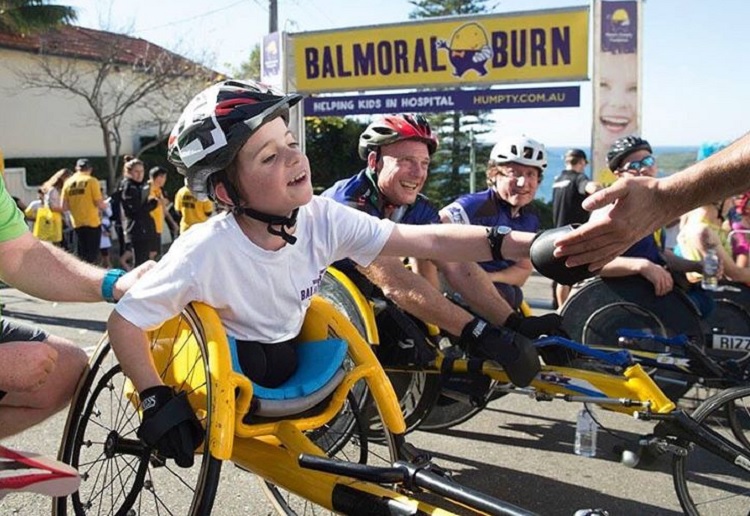 Phil Kearns, one of Australia’s greatest rugby players, founded the Balmoral Burn run 17 years ago. It has since raised millions.

The charity fun run that started with the ambition of raising $10,000 and has now topped over $28 million for the Humpty Dumpty Foundation,  proof that karma is most certainly at work in the Kearns’ family.

One of the machines Humpty Dumpty bought and delivered to a local hospital, courtesy of the money raised through Kearns’ Balmoral Burn, is the very machine that saved both his son and daughter’s life. 17 years ago his son battled a deadly virus, then he accidentally run over his little girl.

Phil had his life turned upside down following that terrible accident.

Nineteen-month-old Andie was lying lifeless and blue in the back of an ambulance that was blaring down his street.

It was 11 years ago. Yet it’s like it was yesterday.

Such is the detail Kearns can recall from his family’s moment of terror that time doesn’t matter.

Every moment is still lodged firmly in his mind — the day he backed over his daughter and changed their world forever.

To give back to the charity he created the Balmoral Burn.

Having now raised over $60 million and continuing to make a significant impact on the lives of sick and injured children at children’s hospitals and health service centres in every state of Australia, the Humpty Dumpty Foundation was established over 27 years ago by Founder and Executive Chairman, Paul Francis OAM.

Through annual fund-raising initiatives including the Good Egg lunch, Balmoral Burn and the Great Humpty Ball along with the support of generous individual and corporate donors, in 2016 the Humpty Dumpty Foundation delivered over 500 pieces of medical equipment to hospitals across Australia.

One of the Humpty Dumpty Foundation’s breakthrough fundraising methods was the creation of Humpty’s Wish List in 2001. Each piece of essential medical equipment that appears on the regularly updated Wish List has been requested specifically by the hospital to meet an immediate need.

The medical equipment requested is stringently assessed by the Humpty Dumpty Foundation’s medical sub-committee made up of senior medical administrators and clinical specialists, before it is added to Humpty’s Wish List.

The Humpty Dumpty Foundation has also provided funding for numerous special projects including a part-time Nurse Educator for training in emergency paediatrics, a part-time Bio Medical Engineer and weekly visits by the “Clown Doctors” and the magical Happy Gardens in various hospitals (which encourage and promote healing).

To date, 320 hospitals across the nation have benefited from the life-saving medical equipment received specifically to care for children and babies provided by the Humpty Dumpty Foundation and its amazing “Good Egg” supporters.