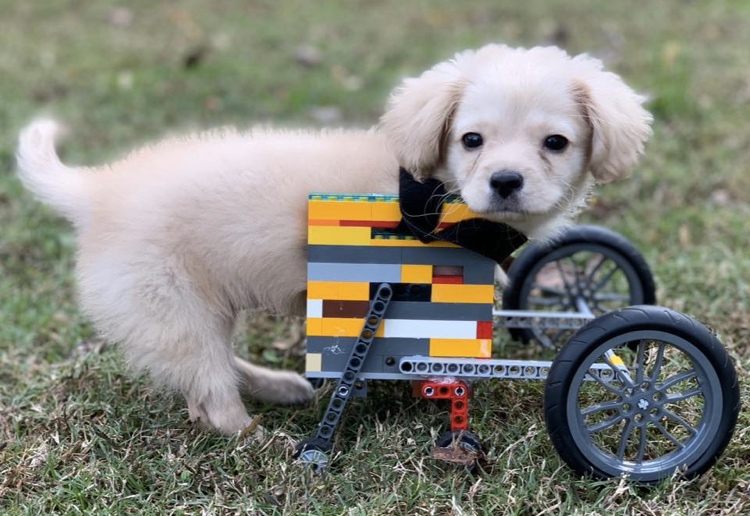 A dog with no front legs has a new lease on life after a kind-hearted 12 year-old boy built her a LEGO wheelchair.

The young disabled pup was only a baby when she was left at a vet, covered in maggots and missing tufts of hair all over her body. She was also born without two front legs.

Gracie, who is now one years old, was transferred to Mostly Mutts Animal Rescue, in Kennesaw, Georgia.

The owners of the shelter were so charmed by the courageous pup that they decided to adopt her.

Dylan, a volunteer at the animal resuce took pity on the 2-legged puppy and built her a wheelchair that could grow as Gracie grows. And LEGO was the obvious choice for an adaptable material to use for the chair.

Dylan built the contraption out of a variety of LEGO and then Gracie was velcroed to it.

“The first couple of times, it took her a few minutes to figure it out, but we ended up getting little pieces of hot dog and when she smelled those, she took off,” Gracie’s ‘mum’ Tammy Turley told The Dodo.

After Gracie outgrew her first wheelchair, Dylan then designed and built a new version, designed to give her better elevation.

Yet another improvement followed soon after, when they realised bigger wheels were needed.

Now at one years old, Gracie has finished growing so she has been fitted with a new more long-lasting chair so she can continue running, playing and having fun like all dogs love to do.

We love this! What an absolutely heart-warming story.