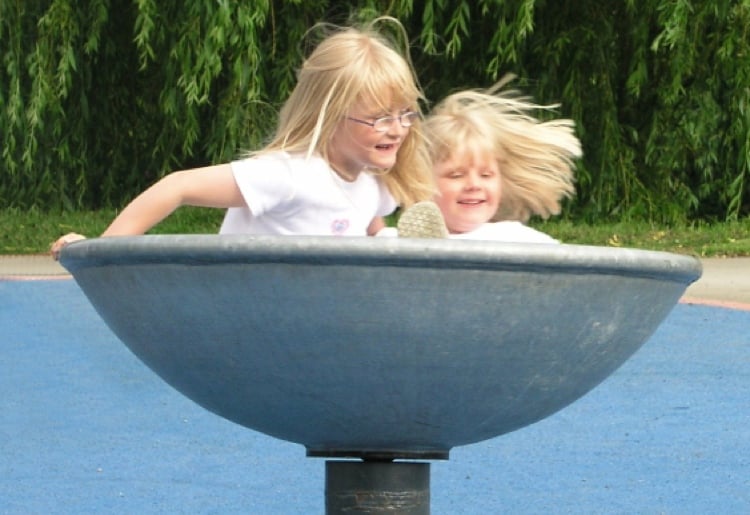 A mum who filmed herself laughing as her hysterical toddler screamed while being spun on a playground round-a-bout, has turned herself into the police.

The girl was yelling ‘I don’t like it’ as the round-a-bout was spinning while the mother giggled at her daughter’s reaction.

The mother, living in the UK, subsequently uploaded the clip to Facebook but was quickly swarmed by furious parents who have dubbed the video as ‘vile’, ‘evil’ and ‘child abuse’.

The video went viral and thousands of people told the mum she should report herself to police, with many claiming they had already reported her.

The mother vehemently denies any child abuse and said they were just ‘having fun’ and that the child was not traumatised, as many had claimed, as reported in the Daily Mail.

The video begins with a toddler, around two or three years old,  sitting in a dish roundabout park ride.

At first, the girl giggles, but then the mum starts to spin the ride faster and the girl screams: ‘I don’t like it, let me get out’ repeatedly as the mother laughs.

When the girl finally gets off the ride, she cries and obviously dizzy, stumbles sideways struggling to keep her balance – as the mother and the man filming laugh.

In another video, the mum then climbed into the round-a-bout with her child, as the man spins them around even faster.

The young girl again laughs but as the ride begins to get faster she starts to scream.

The kid immediately falls forward and lands on the ground and cries in pain while the two adults laugh in the background.

The man filming can be seen reaching out to pick her up by the arm, but as he does so the girl screams and says: ‘What are you doing?’ She then runs off to a different part of the park.

No Point Trying To Defend Myself

‘She’s happily asleep in bed. People are going on like I killed someone.’

She followed by with the comment: ‘I’m waiting on police.’

‘I called myself. They can see the videos and the rest around them, my child is perfectly happy and not traumatised. Let the police do their job.

‘Sharing it around the whole of Facebook won’t change anything. I can see how bad it looks yes, but no one was actually there. No point trying to defend myself though.’

Some critics remarked on social media: ‘She needs reporting to social services, this is 110% child abuse.’

Another said: ‘This is disgusting and pure evil. I hope whoever she is and the loser filming it get a good smack.’

However, others argued that this was a bit overreaction: ‘Was it just me or did I miss something? Pretty sure everyone was spun around as a kid on one of these things.’

A spokesman for the Police said they could not help establish if the incident had been reported due to data protection laws.

Do you think this mum was being ‘evil’? Share your view in the comments.