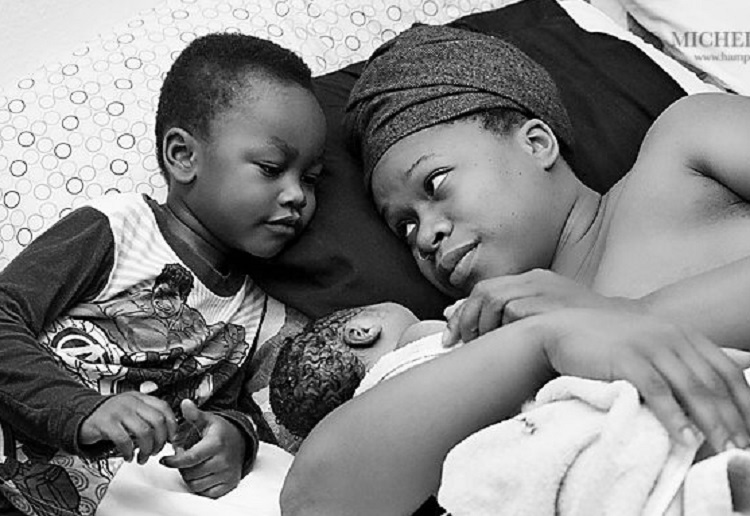 Michelle Lynn was shocked to discover she had been banned from Facebook for sharing a precious moment between a mother and her sons. The image was labelled as “excess skin or pornography”.

Michelle Lynn Hampton Roads Birth Photographer found herself banned from Facebook for 24 hours and from messenger for 72 hours due to this birth image below.

She shares on her page –

“This moment between a mother and her two sons was labelled as excess skin or pornography. Facebook says in their guidelines that nudity is against Facebook standards and that if there are private areas showing that the image will be deleted and you can be banned from Facebook. What I am having trouble with here is the amount of skin that is showing is less than when someone takes a picture in a bikini. This is just not a image to show off a mom who is laying naked in her bed after birth. This is to show the tender moments right after her labour when her oldest son gets to meet his new little brother. This image says so many words that are more gentle and profound than half of the videos going viral on Facebook.

Facebook does not take down videos of kids fighting. Facebook does not take down pictures of racist jokes or memes. Facebook is so backwards when it comes to normalizing birth and the beauty of it. So many birth photographers are getting banned for the images of moms in labour or shortly after labour. All of the explanations of why they were deleted or banned were referring these beautiful images to pornography or explicit adult content. Birth is not pornography. We are not sharing these images to get crazy people all worked up. We are sharing these images to empower women to see themselves in a new light. We want moms to see how beautiful birth is. It does not have to be scary or perceived as nasty. When you ban these images we are telling people that birth is something that is frowned upon and disgusting.

Birth around the world is starting to be seen as beautiful like it once was before men started to tell women to cover up and hide away during labor. We are a progressive community and we want to bring back that natural sense of euphoric emotion. We want to share these images with others because those very moms in the photographs are so proud of the new baby they brought into the world.

I just want everyone to see that birth is normal. It is not something that is pornography or explicit content. We need to open our eyes to the beauty that this world has in it. Birth being one of the most beautiful things because we all had to be born to be here.”

While many women disagree with sharing something so special and intimate, the same goes for those that believe we should have the freedom of choice.

Birth is not pornographic.