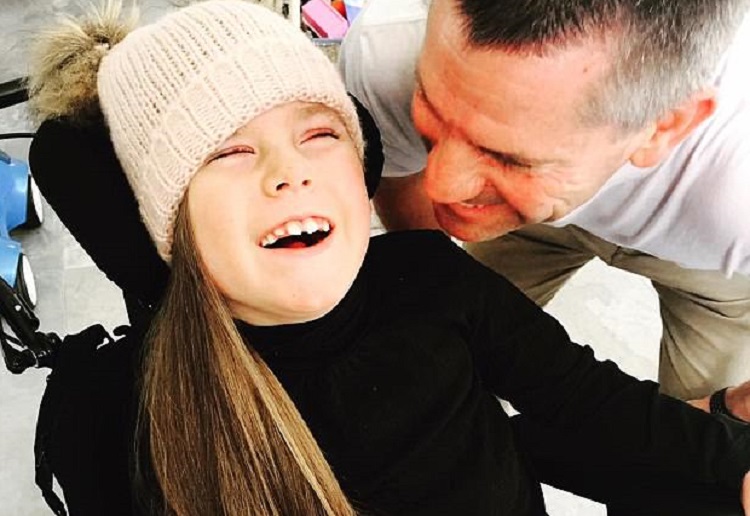 Families are growingly skeptical of flu vaccine despite frightening number of deaths recorded from the infection last year.

In 2010 Saba Button was a healthy 11-month-old toddler when she was left fighting for her young life just hours after receiving a flu shot.

Her parents Kirsten and Mick were told to say their goodbyes the next day, as she became ‘totally despondent’ and her organs began to shut down, shares Daily Mail.

The girl from Perth survived but suffered a permanent brain injury as a result of prolonged seizures, and remains under constant care today.

Mother Kristen said her daughter had just begun to walk and talk before taking her for a flu shot on the recommendation of the health department, Nine News reported.

‘We were told all her organs shut down and we were told to come and say goodbye to our little girl,’ Ms Button said at the time.

The Western Australian government suspended its seasonal flu vaccination program in 2010 after dozens of other adverse reactions in children were reported . (Read more on that here)

Serious adverse reactions to the influenza vaccine are rare, with most common reactions being local redness and swelling.

Other mild symptoms including headache, mild fever and sore muscles may occur in 1-10% of people vaccinated but are limited to 24-48 hours.

Allergic reactions may occur in people with a severe egg allergy, but may receive the influenza vaccine after consultation with their GP.

Please note: It is important to remember this happened over eight years ago, and the vaccine has significantly changed over that time.

Watch the video below of the families interview in 2010

People are skeptical of the vaccine

There were 1,100 influenza-associated deaths recorded in 2017.

Despite those worrying figures, levels of flu vaccine skepticism are on the rise, according to a Finder.com.au survey.

The survey took the opinions of more than 2,000 adults and found that half of them are not planning on receiving the jab this year.

The main reason people gave for not receiving the shot is that they believe it makes them sick or that it doesn’t work.

Generation X were found to be the most suspicious of the vaccine, with 18 per cent thinking it doesn’t work, while only 10 per cent of younger people subscribe to this view.

Baby Boomers are the most proactive with 72 per cent planning on having the shot, according to the survey. About 39 per cent of Generation Y said they will be vaccinated.

Dr Daria Fielder said the vaccine itself cannot cause the flu, although recipients may still become sick.

‘Influenza vaccine is an inactive vaccine and therefore it is unable to give you the flu,’ she told news.com.au.

‘In an ideal world, of course it would be better if everyone receives vaccination. If only some are vaccinated, the virus will continue to spread in the community.’

Department of Health figures have found cases of influenza are already 19 per cent higher than last year, with 12,000 cases already being confirmed.

Meanwhile, two ground-breaking flu vaccines are now available for free to Australians aged 65 and over.

We know influenza is a highly contagious viral infection, spread by contact with fluids from coughs and sneezes.

Typically, Australia’s annual flu season occurs between April and October. For the best possible protection this year, my advice to all Victorians is to be vaccinated anytime from mid-April onwards. This should ensure they are protected by the time the disease begins to spread more widely in the community.

In Victoria this season for the first time we are providing free influenza immunisation to babies and children from 6 months to under 5 years of age. Two doses, given a minimum of one month apart, are required for those children receiving the vaccine for the first time.

Our children require special protection from flu, especially babies and toddlers because they are too young to know how to cover their coughs and sneezes, need help to keep little faces and hands clean and can’t even pronounce cough etiquette, let alone practice it.

A specially formulated junior dose of the influenza vaccine will be provided to children from 6 months to under three years of age.

Children aged 3 to 4 years can receive the regular vaccine.

To be fully protected this winter children need the appropriate vaccine and doses for their age.

Talk to your GP, your local council immunisation service or community health clinic about when the influenza vaccine will be available.

And remember, any child over five years of age is also eligible for free influenza vaccine if they have a high risk medical condition that increases their risk of complications if they catch the flu.

For people under 65 and without significant existing medical conditions, getting vaccinated at any time is perfectly okay.

No one should miss an opportunity to be vaccinated if it has already been already scheduled.

The record number of flu notifications last year in Victoria alone is a timely reminder about the importance of vaccination – there were more than 48,000 cases – and tragically, a number of deaths were reported.

Already, preparations are underway to provide influenza immunisations for a number of key groups in the community. This year, we expect to make more than one million doses of vaccine available.

Our message this winter is simple: ‘You never forget the flu – don’t forget your flu shot.’

The flu is not like a cold. Symptoms last on average one to two weeks but for some it takes several weeks to recover. It kills more than 3,500 Australians each year.

Some of us are more vulnerable to complications and are eligible for the free flu vaccine – the over 65’s, pregnant women, children under five, people of Aboriginal or Torres Strait Islander origin and anyone with a weakened immune system Also, those with chronic conditions such as heart, lung or kidney disease, diabetes and chronic neurological conditions should all be immunised.

People aged 65 years and over will receive a specially formulated flu vaccine that potentially increases their protection especially against one strain of influenza that is more common and severe in the elderly.

All these groups were among those who were affected by flu last year.

And remember, we all have the potential to spread flu to these at risk groups.

Do what you can to avoid getting and sharing the flu – wash your hands thoroughly, cough into your elbow and get a shot in the arm.

If you’re really sick, stay away from work and other places where you’ll spread the flu. And don’t send ill children to school. They can sometimes be the ‘super-spreaders’ of diseases such as influenza.

Influenza vaccine will be available from general practitioners. Many of our pharmacies are also able to provide flu vaccines as well as advice about the disease.
If you’ve got the flu, visit your doctor, talk to a pharmacist or phone Nurse-On- Call on 1300 60 60 24 – 24 hours a day. Victoria also has 12 Supercare Pharmacies open 24/7.

Everyone needs to prepare for the coming flu season.

We also recently shared: What You Need to Know About Kids and The Flu Vaccine