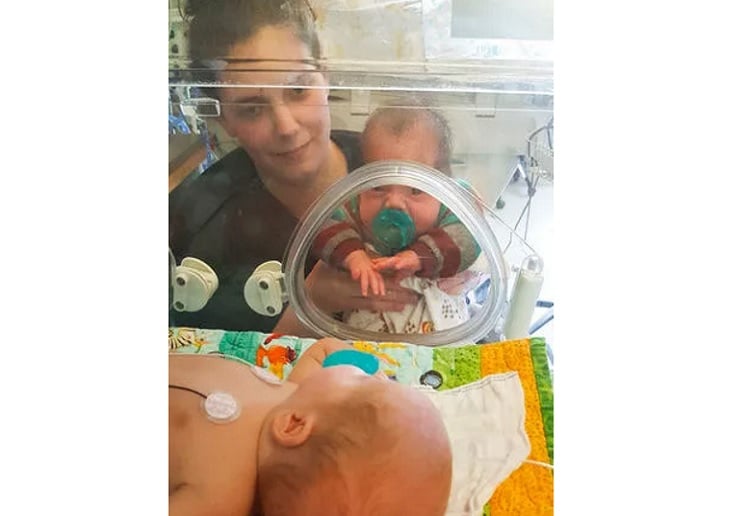 Parents outraged after nurse dropped their premmie newborn on his head. “The nurse is not suspended; she has not been fired; there is no punishment for her.”

According to The Intelligencer, Baby Kieran was being cared for by a nurse in a special-care nursery in Belleville General Hospital in Canada when the nurse accidentally fell asleep while feeding him, waking to Kieran crying on the floor.

“I received a phone call at 8am saying that the nurse had fallen asleep feeding him and woke up to him crying on the floor,” says mum, Kelsey Bond, of the hospital department’s manager’s phone call.

“She said she was sorry … and that a pediatrician had looked at [Kieran] and said he was fine.”

“You’re supposed to be notified right away,” Kelsey says.

Despite being told her baby was OK, Kelsey noticed swelling and redness on the right side of Kieran’s head, prompting her to demand for an ultrasound and CT scan of her son’s scan.

What the scans showed is nothing short of alarming.

These tests revealed that the paediatrician was gravely mistaken; Kieran’s skull had suffered a depressed fracture and an acute subdural hematoma – the collection of blood between the brain and skull.

While the hospital’s management team have publicly apologised, this hasn’t deterred Kelsey from suing the hospital for what happened Keiran, based on “neglect”.

“The nurse is not suspended; she has not been fired; there is no punishment for her.”

Ms Bond said she is “frustrated” and “irritated” and not satisfied by any apology.

“An apology doesn’t fix what happened,” she said. “This is my child’s life.

“When I think about it, my heart’s basically in my stomach.”

She said the nurse remained in the same role. Ms Bond said she feels the nurse should not be allowed to work at BGH, on late shifts or with children, though she did not oppose entirely her working as a nurse.

“If she was tired she shouldn’t have gone to work.

“We are doing a lawsuit for neglect,” she said. Ms Bond said it was too early to estimate the amount of financial compensation the suit would seek, but that she wants Keiran to be compensated.