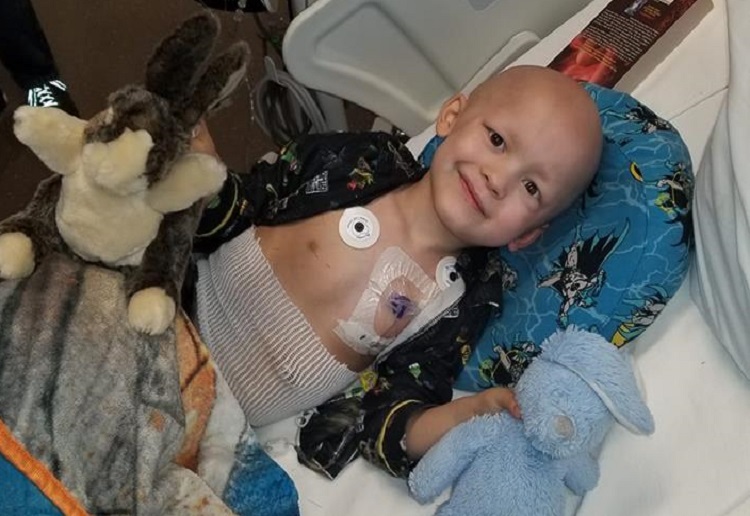 A five-year-old boy who loved heavy metal music and superheroes has written his own obituary before dying of a rare cancer.

Garrett Matthias, alias the great Great Garrett Underpants, was diagnosed with stage 4 Alveolar Rhabdomyosarcoma in September and despite having aggressive radiation and chemotherapy, the cancer spread, shared Yahoo 7.

The little boy, from Iowa in the US, passed away last Friday, but not before his parents Ryan and Emilie helped him write his final message.

The five-year-old started the obituary naming himself “Garrett Michael Boofias”, as his surname is difficult to pronounce and said his favourite things were playing with his sister and his grandparents.

“I am 5 years old. My address is: I am a Bulldog! My favourite colour is: Blue….and Red and Black and Green,” it read.

Garrett then lists some of his favourite things, including superheroes Batman and Thor, his bunny, playing with his sister and Lego.

Under things he hates, Garrett’s first entry is “dirty, stinking cancer,” followed by needles and when doctors access his port.

He also explains where he wants to go after he dies.

“When I die I am going to be a gorilla and throw poo at Daddy!” he said.

“I want to be burned (like when Thor’s Mommy died) and made into a tree so I can live in it when I’m a gorilla.

Ms Matthias said while they never explained to the little boy that he was dying, they had many conversations around what he would want if he did.

“We’ve cried oceans of tears in the last nine months but I think this is one of the things we can do to make his day special and not sad,” she told WHO.

The family compiled the obituary from a series of conversations they had with their son in the weeks leading up to his death.

Garrett Michael Matthias AKA “The Great Garrett Underpants”, of Van Meter, Iowa –
My name is: Garrett Michael Boofias
My birthday is: I am 5 years old
My address is: I am a Bulldog!
My favorite color is: Blue…and red and black and green
My favorite superhero is: Batman…and Thor, Iron Man, the Hulk and Cyborg
When I grow up: I’m going to be a professional boxer
My favorite people are:
Mommy, Daddy, my sister ‘Delcina’ (Delphina),
The grandparents with the new house (Fredric and Cheryl Krueger),
The grandparents with the camper (Daniel and Nita Matthias),
My cousins Grady, ‘that guy I took down that one time’ (Luke) and London Marie,
My auntie Janette and stinky Uncle Andy (Andrew and Janette Krueger),
Those two guys, you know, my uncles (Kristopfer Krueger and James Taylor)
Batman!!

The things I love the most: Playing with my sister, my blue bunny, thrash metal, Legos, my daycare friends, Batman and when they put me to sleep before they access my port.

Things I hate: Pants, dirty stupid cancer, when they access my port, needles and the monkey nose that smells like cherry farts. I do like the mint monkey nose at Mayo Radiation, and that one guy that helped me build Legos (Randy).

When I die: I am going to be a gorilla and throw poo at Daddy!

Burned or buried: I want to be burned (like when Thor’s mommy died) and made into a tree so I can live in it when I’m a gorilla.

“Garrett endured nine months of hell before he lost his battle with cancer. During that time he never lost his sense of humor and loved to tease the doctors and nurses. From whoopy cushions and sneaking clothes pins on their clothes to ‘hazing’ the interns and new staff doctors, he was forever a prankster. Nothing caught people off guard as his response to ‘see ya later alligator':