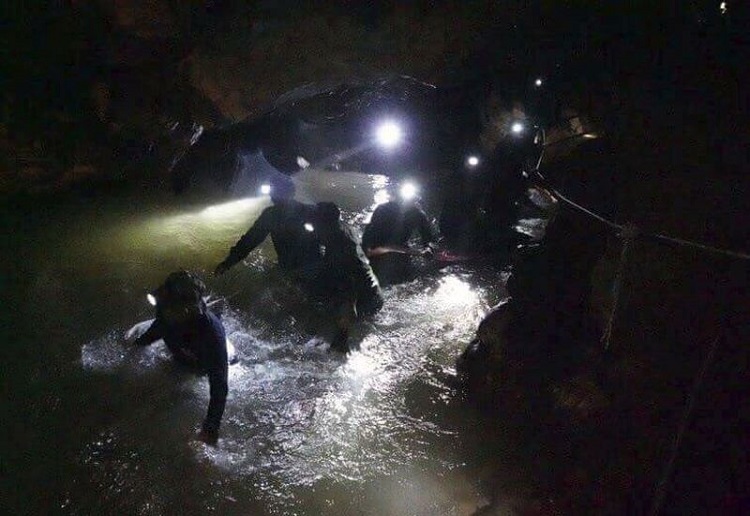 Four of the weakest boys have been plucked from the depths of the Thai cave so far.

While the initial plan was to start with the strongest boys, cave diver and anaesthetist Richard Harris, 53, from Adelaide, assessed the youngsters and their coach and that strategy appears to have been reversed, Thai media has reported.

Four boys have been successfully extricated from the cave, with rescuers taking advantage of low water levels, shares nine news.

It is understood the boys were able to wade through some sections of the underground labyrinth instead of diving.

Oxygen tanks are being refuelled as divers prepare to go in again in an estimated three to four hours.

Thai media reported one of the four boys was in a critical condition and a family friend told a reporter it was the weakest of the group, whose condition has since stabilised.

The boys aged 11 to 16 are members of the Mu Pa Academy Mae Sai football club and have been trapped inside the Tham Luang cave with their coach, Ekapol Chantawong, 25, since June 23.

Lastly came Pipat Bodhu, 15, aka Nick, who was not even in the team but came along as a friend of the goalkeeper.

Eight other young players and their 25-year-old coach of the Wild Boars football team, remain in the cave possibly until tomorrow.

Commanders paused the mission overnight to replenish oxygen supplies and give the rescuers a break.

We hope to hear more good news soon of other boys coming out safely from the cave.

As the parents of the Thai soccer team anxiously wait news of their children, a series of heart-warming letters have been exchanged.