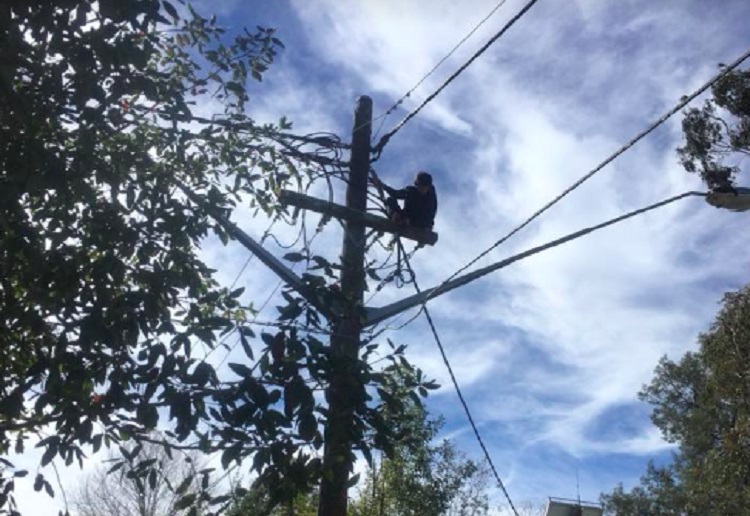 Dramatic footage has emerged of a frightening rescue operation to bring an intellectually disabled child down from the top of a live power pole.

Sutherland Fire crew shared, “Quick thinking emergency services and bystanders led to the successful rescue of the intellectually disabled child who climbed to the top of a live power pole on Wednesday.

“About 1:20pm, emergency services including Fire and Rescue crews from Sutherland Fire Station 046 FRNSW and Miranda, Ambulance NSW and officers from Sutherland Shire Police Area Command were called to the corner of Eton Street and Park Street after reports a child was located at the top of a power pole, surrounded by live power lines.

“A matter of urgency kicked in and crews were quickly on scene, closing local roads while Ausgrid immediately shut down power to the area.

“Bystanders grabbed anything from pillows to cushions and placed them below the young boy to ensure his safety before firefighters used a rescue ladder truck to cautiously approach the adventurous child who was perched on top of the approximately 15 metre high pole.

There was a resounding clap and sigh of relief once the boy was safely removed from the power pole and brought down.

”All emergency services and Ausgrid worked extremely well together under extreme duress and urgency to achieve the best possible outcome,” said a Sutherland Fire Station spokesperson.

Amazingly, the boy did not sustain any injuries throughout the ordeal and has since been reunited with his parents.

How frightening! The little boy has promised there will be NO MORE climbing.