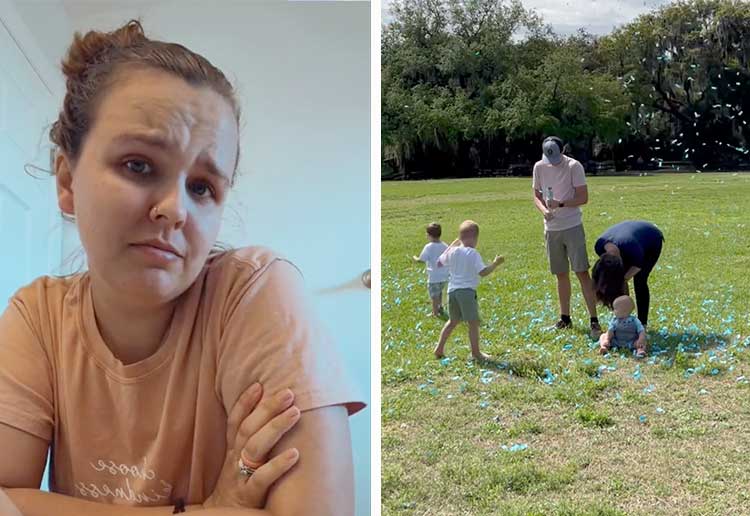 A pregnant mum-of-three has revealed her ‘heartbreaking’ gender disappointment after finding out she’s pregnant with her fourth boy.

Erica Jane shared her raw feelings on TikTok, saying she’s mourning all of the things she’ll never get to experience without a daughter.

“A lot of people just don’t really understand gender disappointment,” she explained. “It’s like thinking into the future, I’m always going to be the mother-in-law. I don’t get to go dress shopping. I don’t get to witness my own child have a baby of their own, that comes out of them being a woman.

“Going through pregnancy, like I would want to be there for somebody. And sure I could have a great daughter-in-law but I don’t know. It’s just, really heartbreaking.”

Her video attracted almost two thousand comments, some supportive and others scathing in their judgement of the 23-year-old mum, who is 10-weeks-pregnant with her fourth boy.

“Your feelings are valid, but also these sorts of expectations should not be placed on any child. Many don’t want to get married or have kids,” wrote another.

“The best way I can describe the feeling is I was not disappointed I was having a boy. I was grieving the little girl that I’ll never have,” wrote a supportive mum.

‘It’s ok to have gender disappointment’

Erica addressed the comments in a follow-up video, saying she’s receive lots of support from other mums who feel the same way, but are too frightened to speak up.

“I feel like this isn’t talked about enough, because so many people get judged. You can clearly see in a lot of my comments that people are still judging me, saying really mean things. But there’s so many people on here that are saying thank you for speaking out.”

She also said she feels her upbringing may have influenced how she’s feeling about never having a daughter, as well as acknowledging her boys will walk their own paths.

“As a little girl I didn’t have the relationship I wanted with my mum or with my grandmother who adopted me and raised me so I feel like maybe that might be why I’m wanting a daughter so bad. But also I get that even if I had a daughter, she could not want dresses, she could not want girly things, which is fine.

“My boys may grow up and be transgender which is fine. I’m not expecting any of my kids to give me grandkids. I just think a lot of people took my video the wrong way. I just wanted to show my emotions and let everybody know that it’s ok to have gender disappointment. It’s ok.”

Did you have gender disappointment when you were pregnant? How did you overcome it?