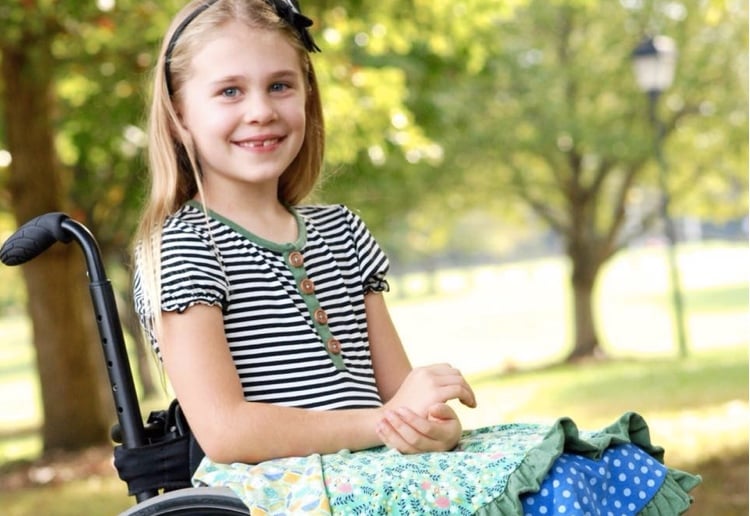 Eden Hoelscher collapsed in pain after doing a simple backbend (where you push yourself up from the floor) before Christmas in 2015.

Her mother, Kylee Hoelscher, gathered the young girl, who was 5 years old at the time, in her arms and tried rocking her to calm her down.

However, she was unaware of how serious her injury was. When Kylee rushed her to hospital, she was told Eden was paralysed from the waist down.

Eden was confined to a wheelchair, having lost the ability to sit up on her own.

“Her bowels and bladder did not work. We had to wake up twice a night to move her so she won’t get pressure sores from sleeping in one position too long,” her mum said.

However, just over two years later, Eden is doing amazingly well. Last year, during a play sword fight, she began moving toward her best friend, Violet. The steps —with support from helpers — turned into a five-minute walk and marked the first time Eden walked since her accident.

“That was really, really amazing because it was the first time she took steps,” Eden’s mum told TODAY. “She just started walking toward Violet … she was walking all over the room and out into the hall.”

Eden walks on a treadmill while in a harness during her pediatric locomotor training. However, during her sword fight with Violet, her mum believes that Eden moved without thinking. It was a natural reflex much like what happens with people without paralysis.

Soon after the accident, the Hoelschers discovered the Frazier Rehab Institute in Louisville, Kentucky. The centre focuses on a unique program that re-trains an injured spinal cord to send messages differently. This allows it to bypass the injured area.

Eden has no official long-term prognosis and there’s no guarantee she’ll be able to walk on her own, but she’s come a long way from not being able to sit up. She is growing stronger and improving, with the hope of walking again one day.

Because of Eden’s progress, the family moved from California to Kentucky allowing Eden to continue therapy.

“In her own little quiet way, she sees herself getting better and that kind of buoys her,” said Hoelscher.

The family shares updates on Eden’s progress on her Facebook page, Stand with Eden. The Hoelschers have been using social media to educate others about pediatric spinal cord injuries.

“Our whole thing is building awareness about pediatric spinal cord injuries so other parents don’t have to go what we were going through,” said Hoelscher.

The latest post on her facebook talks how Eden has transitioned from locomotor training (on the treadmill) to NMES (electrical stimulation) and the results have been reassuring!

We will continue to watch Eden’s remarkable progress.