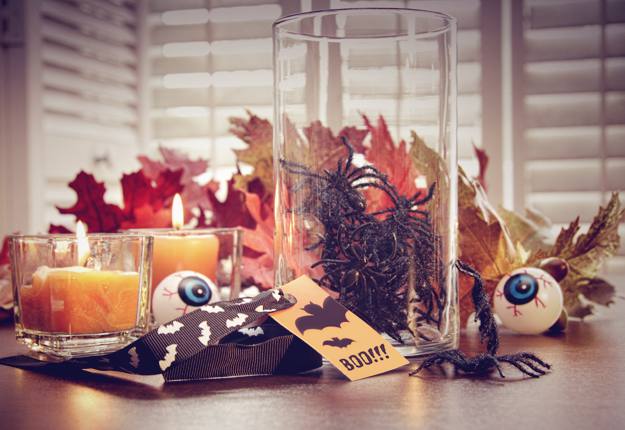 Here are some great Halloween decoration ideas to help make your Halloween more spooktacular than ever before.

Create a Ghostly Walkway: If your party is in the evening, you can make a spooky walkway on an outside path. Take old plastic milk jugs (like the 2L ones from the supermarket) and cut a hole in the bottom of each jug. The hole will need to be big enough to fit a battery operated tea light. On the opposite side from the handle, using a black marker, draw a face on each jug. Then turn on the tea light, place the jug over it, and voila! You’ll have an eerily lit path for your guests to walk by. Just make sure you don’t use a lit candle, because the flame won’t be friendly to the plastic!

Have ‘Eyes in the bushes’: Cut out eyes in toilet paper rolls, making sure to do different shapes in order to get different effects. Then place a glow-stick inside of them and hide them in your bushes – it’ll look like there are creatures hiding and waiting to pounce!

Hanging Ghosts: Make Ghosts hang from your ceiling by blowing up a white balloon and draping it with cheesecloth (or a similar very light, gauzy white fabric). Tie the cheesecloth un- der the balloon with a rubber band, and then draw eyes and a mouth on the face (the balloon section). Then hang it from the ceiling, to create the illusion of ghosts flying through the air (you could even hang one from a ceiling-fan with it on the lowest setting, for an extra spooky effect).

Make Sign Posts: Using old bits of wood (or even heavy cardboard) paint spooky place names on them such as ‘Goblintown’, ‘Skull Alley’, and ‘Dragon’s Den’ and place them in various places throughout your house and backyard.

Make Spooky Silhouettes: Cut out shapes such as bats and cats out of black cardboard and stick them inside of your windows so the ominous shapes can be seen from outside.

Make a Witches Potions Station by placing jars full of snacks and lollies and labelling them with grotesque phrases such as “troll teeth”, “mummified toenails”, “bat whiskers”, “lizard gizzards”, “tooth of wolf ”, “eye of newt”. This can also double as a lolly-bag bay.

Double, double, toil and trouble…Halloween is even more the fun when you can create some some!

Make Bats by painting old toilet rolls black and cutting out wings and ears out of black carboard. Buy different types of pasta (spagehetti, penne, bow, curls) and do pasta skeleton craft with them.

Make your own spider webs by tying three sticks together at the middle so it looks similar to a 6-pointer-star. Then, starting at the middle where they are attached, wrap the yarn from stick to stick. Continue doing this until about an inch from the end of each stick, and tie it off. Then leave a dangling bit of yarn from the stick and attach a fake spider to it.

If sticks are too cumbersome, cut out the middle of a paper plate and take a hole-punch around the outside border (if you don’t have one, you can also use a pin to piece it and then stick a pencil through to create a bigger hole). Then get the children to weave some yarn back and forth through the holes to create a web effect.

If your children are too small to carve pumpkins – get them to make a mask for the pumpkins! Simply cut out a shape that will cover the pumpkin, get them to draw a face on, and then attach it with twine. Alternatively, you can draw on the face with markers. If you’re up to carving, don’t forget to check out our great pumpkin craving templates thanks to Moraitis.

If you don’t mind a little bit of paint, you can make your own bats or ghosts by painting your hands. For bats, use black paint and place your hands so your palms touch each other at the bottom.

For Ghosts, use one hand and print so it’s upside-down (so your fingers are at the bottom).