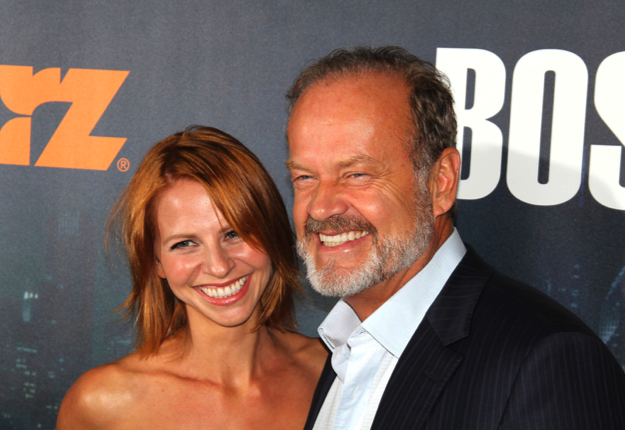 Kelsey Grammer, star of Frasier and Cheers, welcomed his sixth child last month but at age 59 says he wants even more.

“We are blessed and excited to have this lovely young man join our family — he is magnificent,” said the actor and wife Kayte when son Gabriel arrived to join Faith, 2, Mason, 12, Jude, 9, Greer, 22, and Spencer, 30, who has her own 2-year-old son.

Even with such a full dining table at Christmas, “I can’t imagine not trying for more because it’s been incredible,” said Kelsey. “As soon as [he] came out, Kayte and I were going, ‘Yeah, let’s do another one.’”

Their new baby has made a smooth entry into the family. “Gabriel’s fantastic … He is a lovely kid. He’s been real easy and agreeable.”

However, big sister Faith “is having a little more trouble than anybody else … she realises that her world has been chopped in half,” he says. “This wrinkle, I think, pushed her over the edge a bit.”

But “She kisses the baby all the time.”

The busy dad has a new series, Partners, and a blockbuster movie, The Expendables 3, but he’s not too busy to change nappies. “I do more of Faith’s now, and [Kayte] has been pretty hands-on with Gabriel stuff. That’ll even out in time,” he says. “The bigger jobs are the ones I’m usually asked to do — the phrase now is, ‘Daddy, there’s a poop.’ So, that’s the one I’m in charge of.”

Five months later came news Kayte was expecting twins. She went on to give birth to Faith but they revealed that her twin brother had died in utero.

Then, when new baby Gabriel was on the way, Kelsey was “so excited,” his actress daughter Greer said in May. “He is so happy. My dad loves babies. He loves having children and he’s always wanted a really big family, so he’s just really excited to have a new little life in the family.”

Being a dad is the best role for this actor. “It’s just this overwhelming gratification of being close to life like this. It just gives you such hope and joy,” he says.

“I’ve never felt more alive or more serenely happy than in the throes of life with these young people. I really enjoy it.”