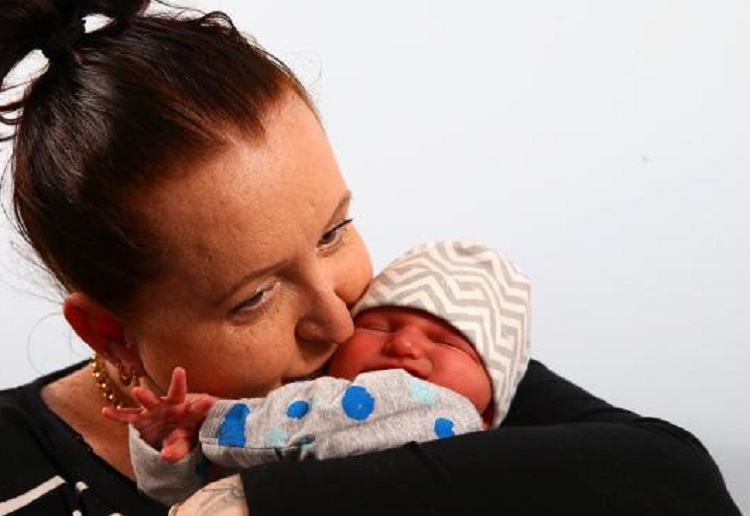 Just hours after giving birth this young mother was told the horrifying news that her partner and father to her baby boy had committed suicide.

Patrick Foresi, 42, went missing on May 30, weeks before Nicole Astill, 29, was due to give birth to their first child, reports Daily Mail.

The boilermaker had a history of anxiety and depression, Ms Astill told the Gold Coast Bulletin, so when police walked into her hospital room her worst fears were confirmed.

Ms Astill recalls the last morning she saw her partner of four years, as he walked out of their Tweed Heads home.

‘He just woke up in a mood. It’s as though he knew what he was going to do now that I look back,’ she said.

Ms Astill said that while the 42-year-old was excited about becoming a father, he felt pressure to provide for his growing family.

“Stressed about money in particular, with the baby coming he wanted to be able to provide everything for us,” she said.

“He believed that the man of the house should look after his family, he was old fashioned.

“His whole life he was used to earning great money but in the last 12 months, especially, he found it difficult to find work around here.

“Some weeks we didn’t know how we would afford our rent and when things like this happened he suffered from severe anxiety that led him into a depressive state.

“I mean there were other things in his life he suffered from, but mainly he just felt like a failure.”

She said that the 42-year-old had been used to earning good money, but that had changed in the last 12 months and he had found it difficult to find work in the area.

A month after Mr Foresi went missing, his body was found in Mebbin National Park in Northern NSW.

Ms Astill said Mr Foresi had a name in mind for their baby before he died, but he didn’t want to tell her before the birth.

She decided to name him Henry Patrick Foresi, after the father he would never meet.

‘Pat didn’t want his name included in the baby’s name, but it only felt right,’ she told the Gold Coast Bulletin.

Ms Astill said Mr Foresi struggled with his mental health but avoided talking to people about it, battling his sickness behind closed doors.

“He was a sick man, not many people would have seen it, a lot of it was only noticeable behind closed doors,” she said.

“Mental health is a serious issue, especially for men.

“They don’t need to be too proud to get help, even if that help is by talking to a mate.

“I’m coping. By taking each day as it comes. The baby is a great distraction.”

Heartbreaking. Our thoughts are with family and friends.