OMG I don’t know if I would still be married to this guy if we had done this to me! A bride was mortified when she whispered a dirty secret to her groom just after she had reached the end of her aisle, without knowing he was wearing a hidden microphone.

The amused groom, Luke Logan, shared the hilarious video on Twitter in a bid to get a spot on a Jimmy Fallon segment.
It’s certainly no longer public with over 64k people viewing the footage.

The bride was blissfully unaware that the videographer had previously given the groom a microphone to wear so that their vows could be recorded for posterity. But it certainly wasn’t their vows that would be remembered.

The video shows the hubby-to-be greeting his fiance at their wedding ceremony.

“You look so beautiful,” the loved-up groom whispers.

The bride not-so-elegantly replies (in supposed confidence): “I took a really big dump right before I came down the aisle.”

The totally unexpected ‘secret’ made the bride giggle, while the groom sneakily encouraged her further.

“What the hell is wrong with you?” he asks, before admitting that the microphone had also shared in their amusing exchange. 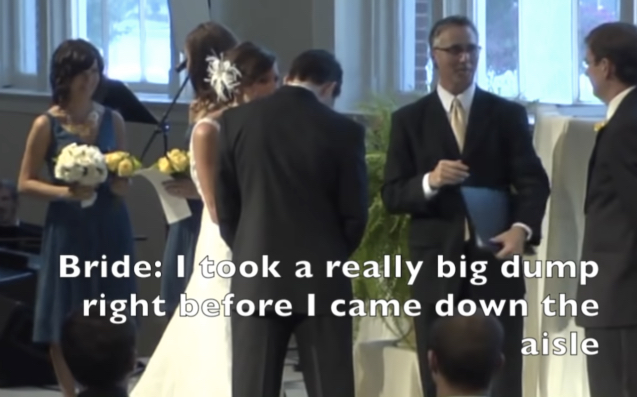 The video has attracted a huge number of fans with comments saying how funny the clip was.

The couple has now been married for nine years and have a young daughter. But Luke is clearly still very much in love, following up his video with some endearing comments:

“I married a pretty awesome lady,” he added.

“An honest woman like that is hard to find,” he said.

“I hope we stay married after she learns how many people have watched this video!” he joked.

Did you have a #weddingfail? Tell us in the comments below.