Article UPDATE from mum who accidently starved her baby to death 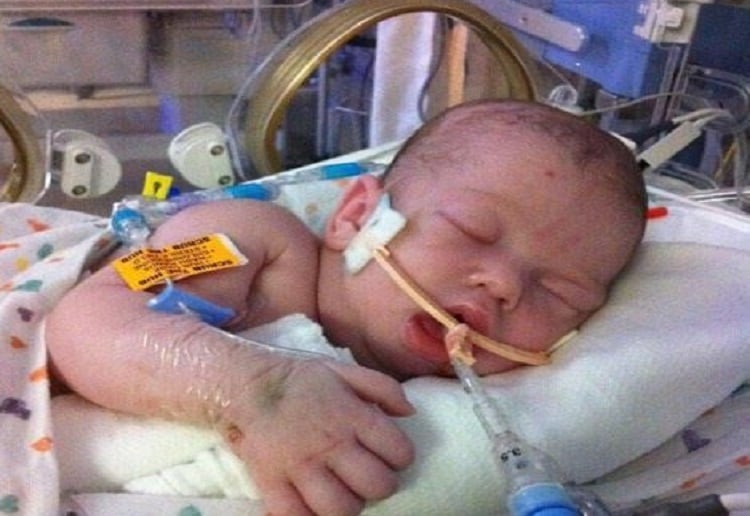 On what would have been her sons fifth birthday, his mum, Jillian Johnson, finally speaks out about the death of her baby boy at 19 days old.

Jillian has struggled with wanting to share what happened to baby Landon for a long time. She feared what others would say and how she would be judged.

However, she is ready to put those feelings aside in the hopes that sharing her story will help prevent other families from experiencing the loss that she has been suffering.

Jillian shares on the Fed is Best page that Landon was exclusively breastfed, even though he would constantly cry unless he was on his mum’s breast. Jillian felt like she was continuously breastfeeding and when she asked why her baby was always on her breast, she was told that it was because he was “cluster feeding.”

“I recalled learning all about that in the classes I had taken, and being a first time mom, I trusted my doctors and nurses to help me through this – even more so since I was pretty heavily medicated from my emergency C-section and this was my first baby,” she wrote.

“But I was wrong. I’ve learned I have to be my child’s number one advocate.”

Landon nursed over nine hours during his first 24 hours of life, but after being alive just 53 hours, he had lost 9.72 percent of his birth weight.

Landon was discharged at less than 3 days old and continued to frequently and exclusively breastfeed “with a mother whose milk had not come in.”

“So we took him home . . . not knowing that after less than 12 hours home with us, he would have gone into cardiac arrest caused by dehydration,” she wrote.

“Did you know newborns aren’t supposed to cry all the time? They’re supposed to eat and sleep and dirty their diapers. I had no idea that he was inconsolable because he was starving – literally.”

Jillian shares, “the best advice I was given by one of his NICU doctors while he was on life support is sure breast is best, but follow with the bottle.

This way you know your baby has eaten enough….if only I could go back in time.”

I still have many, many days of guilt and questions – what if I would’ve just given him a bottle? And anger because how would I have known. I remember when Stella was born, and she was always quiet. I kept asking the nurses what was wrong with her. They said nothing. She’s doing what she’s supposed to. Sleeping. Eating. And it was then that I realized that it wasn’t normal for a newborn to cry as much as Landon did. He was just crying out from his hunger. But I didn’t know. I should’ve known.  I still struggle daily feeling as though I failed him.

Read her full story on Fed is Best

After sharing her story on Fed is Best, Sheryl, has been able to ensure her tragic experience teaches other mothers there are other options and breastfeeding isn’t always right for everyone. Breast isn’t always best.

Appearing on an episode of The Doctors, Jillian said: ‘Life isn’t the same after losing a child. There’s a huge hole in my heart, all because we trusted everything that we were taught – that exclusively breastfeeding is best thing for a baby.

“We want to educate as many parents as possible that you have to be your child’s number-one advocate,” Jillian says.

‘His death was 100 percent preventable. There is no reason that he shouldn’t be here today other than we were failed.’

There are two reasons why a child isn’t breastfeeding properly; the mother isn’t producing enough milk or the baby isn’t latching onto the breast appropriately.

There are several indicators that a newborn isn’t breastfeeding correctly that parents can spot to make sure the child is given the proper supplements immediately.

Experts advise mothers to exclusively breastfeed their child for the baby’s first six months of life and then for six more months while introducing new food to them.

Expert speaks out “Babies do not die from cluster feeding”

Meg Nagle, an International Board Certified Lactation Consultant, recently explained when cluster feeding is NOT NORMAL.

“A baby who is awake all the time or very sleepy all of the time is a baby who might not be getting enough OR have something else going on.”

“A baby who is breastfeeding for up to an hour or more at EVERY or MOST feeds, 24/7. This is a really important one. Babies will breastfeed anywhere between 5 minutes to 45 minutes-ISH. And the time spent at the breast can change between each feed for the same baby.

BUT if your baby is taking an hour or more at every or most feeds then this can be an indication that they are not effectively and efficiently removing the milk. Time to get an IBCLC or volunteer breastfeeding counsellor to help you look at the whole picture and assess whether or not your baby is getting enough milk.”

Previously  we shared a very similar story from Mandy.  Thankfully with the help of family and her local doctor she realised before it was too late. Read that article here.

Image via Fed is Best