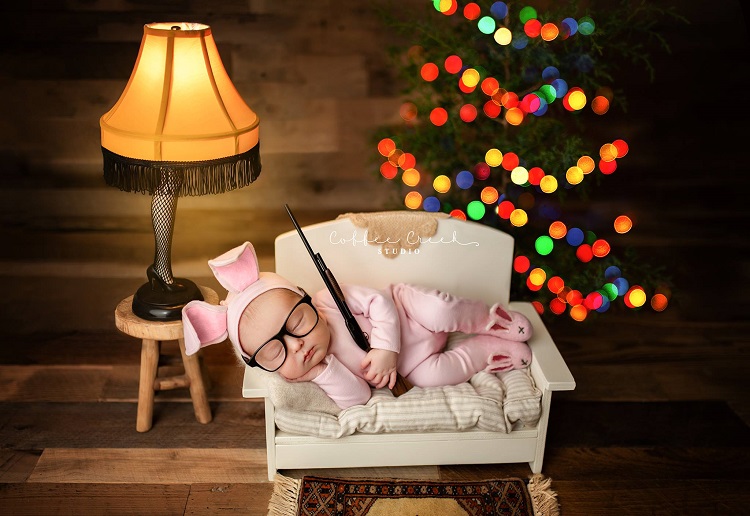 A photographer has come under fire for sharing a picture of a baby holding a rifle.

Amy Haehl of Coffee Creek Studio is receiving mixed reactions to her photo of a baby boy dressed up as Ralphie from A Christmas Story — wearing a pink bunny suit complete with gun and glasses.

Ms Haehl, of Indiana, US shared the photo to her business’s Facebook page of baby William in a setting with miniature furniture that looks nearly identical to what’s in the film.

Her followers soon shared their concerns about portraying a child with the weapon in the country’s current political climate.

“Will now unfollow you. Who the hell would take a picture of a baby and a gun just for money. Such a waste since you are so talented. Think hard about your lack of principles,” someone commented.

Ms Haehl replied to clarify that she hadn’t in fact been paid to do it.

“In a world where there’s so much negative let’s be positive and laugh a little! I clearly stated the gun was wood just in case someone would be concerned.”

Another said: “Also unfollowing and unliking you. Extremely distasteful. How do you think the parents of the babies that were killed in Newtown would feel looking at this photo?

Ms Haehl tells Yahoo Lifestyle that she meant to “bring a smile to people’s faces” with the re-creation.

“Of course I know in the world we live in I was taking the chance that someone would be offended, and I definitely did take that into consideration while still creating a photo with the perfect details,” she says.

“I know there have been a few comments made in regards to gun violence, and this photo is in no way meant to encourage gun violence or offend anyone who has been affected by gun violence.”

In fact, the photographer says that she had intended to remind people of a time when life was simpler, which seemed to resonate with many people.

Amy shared on her Facebook page, ” I respect the opinions and concerns of others in regards to gun violence and for that reason I want this photo to be a reminder that it isn’t about the “gun.” It’s about so much more than that including being strong families, good parents, and raising children to have strong morals and values and respecting others. So, if anyone hasn’t seen this movie…cuddle up with your friends/family/pets, tell them you love them, watch it, and smile a little this holiday season! ”

What do you think of the photo?