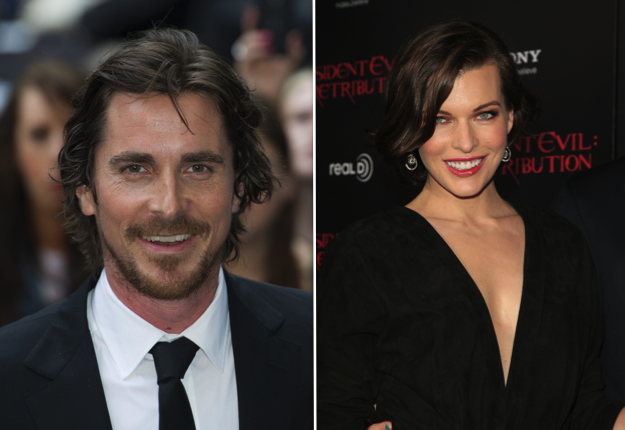 Hot on the heels of the arrival of Christina Aguilera’s daughter, Summer Rain, and Kate Ritchie’s first baby comes news that Christian Bale and his wife, Sibi Blazic, have also welcomed a new baby.

The Batman star and his 44-year-old former model wife already have 9-year-old Emmeline, who now has a new baby brother. Former model Sibi’s pregnancy was first reported in March, though the date of birth and baby boy’s name have not been announced.

As a dad, “I’m a court jester,” the 40-year-old actor said in 2008. “My wife and daughter come with me on location. It’s the most ideal mix. These wonderful distractions actually make me better at what I do.”

Actress Milla Jovovich, 38, is also going to have another ‘wonderful distraction,’ with news of her second pregnancy with her director husband, Paul W.S. Anderson, 49.

And it was a surprise, as she revealed on Facebook.

“This was originally going to be a post to tell you how excited I am about flying to Cape Town, South Africa to begin working on Resident Evil: The Final Chapter,” she posted. “But… My husband Paul and I just discovered that we are expecting another baby!!!”

“So after a lot of discussion, we thought it would be in everyone’s best interest to wait till the baby is born before we set out to try and tackle an RE movie.”

“Between the stunt work and what will become my ever-expanding belly, we didn’t think pregnancy and zombie killing are the best combo! Lol! I imagine the only thing I’ll be killing in the near future is an endless supply of cupcakes. Yikes…”

But that won’t really worry her. Milla has a healthy attitude to pregnancy weight – when she was expecting their daughter, Ever, now 6, “I gained nearly 70 pounds [32 kg],” she said. “It took a year to put on that weight and a year to take it off.”

“The rule when you get older, it really is a choice between your ass and your face,” she declared in 2010. “It’s a little cellulite on the booty or you look like a hag. As you get older, you need a little weight on your face to look better and younger.”

But being a mother helps put everything in perspective.

“Your first concern is your child over your own life, career or all your insecurities,” she said. “All of that is in the distance.”

“What could be worse than having your baby get sick? There is nothing worse than worrying about her if she falls. As long as she’s OK then everything else in my life is so easy”.