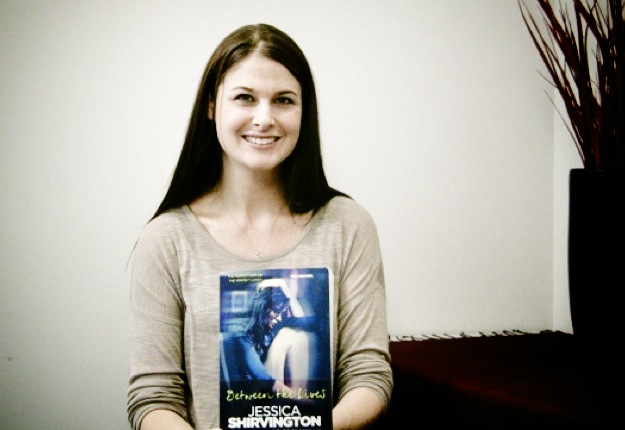 She’s a wife, mother and a successful novelist who, by the end of 2013, will have six young adult books on store shelves with another two on the way in 2014.

Jessica admits she thrives on all the constant activity, working her demanding researching, editing and writing schedule around her first priority – “keeping my two daughters cleaned and fed”.

Like many writers with parental responsibilities, writing is squeezed into wherever possible. Even though she is constantly on the go, she wouldn’t have it any other way, admitting she hopes she will be able to keep on writing two books a year.

It all began back in 2009 when she was living in London with her husband and
children, and running her own coffee distribution business. Wanting to return to Australia to raise her kids, Jessica and her husband began preparations to move back home.

During this 18 month process, she started tinkering with a story idea that eventually evolved into a book. “I didn’t plan it but, once I started, I knew I would keep going. I didn’t  care if it took me years to get it published, I was going to keep going.”

While Jessica was in the middle of writing her first book, she started looking for a way to develop her writing skills and found it in the online course in Creative Writing at the Australian Writers’ Centre.

“My main motivator was to put myself around people who knew the industry and could talk through how it all worked. The other motivator was to simply learn more about the rules… structure, plot strategies and so on.”

Throughout the course, Jessica continued to work on her draft, reworking and rewriting everything from sentence structure to whole chapters of what was to become her first book, Embrace.

After completing an early draft of her manuscript, Jessica undertook a manuscript assessment which confirmed many of Jessica’s intuitions, clarifying issues and forcing her to work on them.

By the last couple of weeks of the course, her hard work paid off. Selwa signed her as a client and told Jessica that publishing powerhouse Hachette were interested in Embrace, the first in what came to be known as the Violet Eden series.

Embrace has now joined by three more books in the series, Entice, Emblaze, and Endless. She has just released a stand-alone title, Between the Lives.

She also recently scored another win when it was announced that the Violet Eden series will be adapted by Steven Spielberg’s Amblin Entertainment in partnership with CBS Television Studios for development into a TV series on the CW Network!

Jessica is now a full-time writer and her books have been sold into 13 countries including the Czech Republic and Brazil. A busy Sydney-based mother, Jessica’s main priority is her two daughters, aged five and seven. But she says that being able to write and tell stories means she’s also “living her dream”.

For more information about writing courses which you can do from anywhere in
Australia, visit www.WritersCentre.com.au