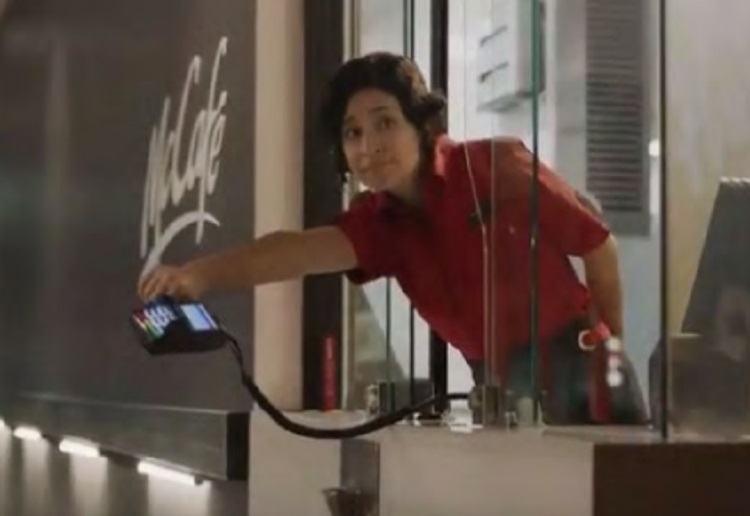 McDonald’s, McCafé ad showing a father driving at night, with his baby sleeping in the back seat cops criticism.

Afraid that the baby will wake up if the car stops, but desperate for a coffee the dad of course heads to a McDonald’s drive thru. But rather than risk his baby being disturbed, the dad whispers his order into the speaker as he goes through the drive thru again and again.

Mumbrella reported that, “Complaints posted to Ad Standards pointed out the driver – who had a young sleeping child in the back of the car – didn’t have two hands on the wheel, used pay pass while driving, failed to stop while going through the drive-thru and hung out the window.”

In its response to the complaints, McDonald’s noted that the father is not risking the infant with speed or compromised safety, and has two hands on the wheel for the majority of the time.

“The driver is continuously checking his rear view mirror, his surroundings, where he is going and for the majority of the advertisement, has two hands on the wheel.

“It is not questionable whether or not the driver in this advertisement appeared in proper control of the vehicle in all scenarios of the advertisement and did not appear to be driving dangerously or in a manner that may be uncontrolled,” McDonald’s said.

The Ad Standards Board agreed and acknowledged that while the driver used pay pass to pay for the coffee, he only takes his eyes off the road for a negligible time.

Furthermore, they found it was “a fleeting scene in the advertisement and is not encouraging irresponsible driving habits”.

Despite the complaints, the board dismissed the case, trusting that viewers would understand the humour intended by McDonald’s in depicting this common parenting scenario of the challenges of keeping a baby asleep whilst looking after their own needs.