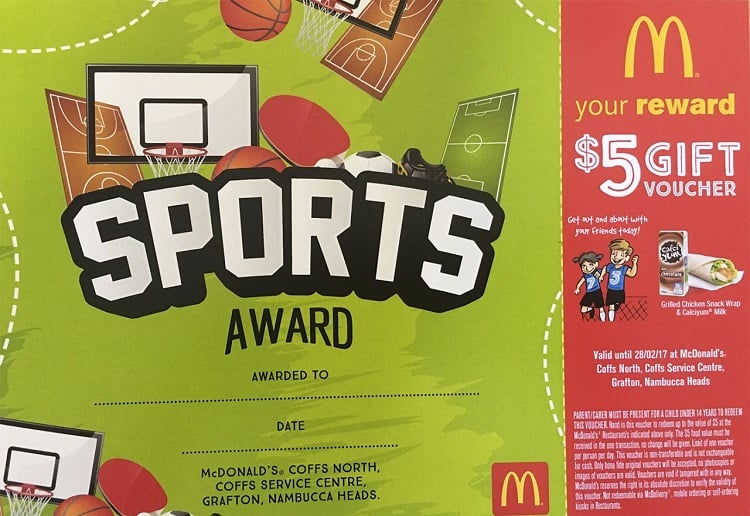 The review Panel found McDonald’s to be in breach of Quick Service Restaurant Initiative for Responsible Advertising and Marketing to Children (QSRI) regulations, but despite this the fast food giant will continue its support of junior sport and its commercial partnerships with national sporting bodies including the AFL, shares Yahoo 7.

McDonald’s said the complaint to Ad Standards was due to an isolated incident and it will work hard to comply with nutrition codes when distributing prizes to junior sports clubs.

The controversy over the meal vouchers was sparked by a furious parent after their six-year-old child received a $5 ‘man of the match’ voucher following a game of soccer.

The unidentified parent submitted a complaint to Ad Standards saying they felt the child was being ‘rewarded’ with junk food.

“As a parent, I am angry that while participating in weekend soccer my child was given a ‘man of the match’ award for playing well that involves going to McDonald’s,” they wrote.

“It is hard enough to promote a healthy lifestyle to children in this environment, I don’t appreciate junk food being given to them as an award during a sporting activity.

“This encourages bad lifestyle choices of eating junk food following sporting activity and goes against everything I teach my children.”

Despite this they will continue supplying food vouchers to kids through junior sports clubs despite the Ad Standards Community Panel upholding a parent’s complaint that “bad lifestyle choices” were being forced onto children.

McDonald’s said they were “disappointed to learn of the complaint” but confirmed that the incident was an isolated problem and will continue to distribute vouchers that have been approved.

“We have more than 970 restaurants and work hard with all of them to ensure compliance with the relevant codes,” a McDonald’s spokesperson Chris Grant said.

“Unfortunately, on this occasion, the voucher issued by this specific restaurant was not passed through our standard approval processes. As soon as we were made aware the voucher was withdrawn.”

The voucher found to breach QSRI regulations had a $5 value that could be used to purchase any item on the menu. Approved vouchers can only be used for particular items, for example chicken snack wraps, low fat milk or apple slices, and cannot be exchanged for other products.

Would you be happy for your child to be rewarded with a Maccas voucher?