It’s Small Fry David vs McDonald’s Goliath in the Big Burger Battle…but it looks like poor old David has no chance in this one.

McDonald’s didn’t waste any time in serving a threatening legal warning letter to a tiny family-owned burger joint, after it accused the small takeaway shop from infringing on the McDonald’s trademark.

It all started when Burger Head, a fast food outlet in Penrith on Sydney’s West, put a post up on social media saying that for their first special of the year, they’re launching the “Better Mac”.

“You’ve seen @mcdonadsau bring out the bigger better Big Mac and the Grand Mac…Here’s our take on things.

We could list the ingredients, but you all know what’s in this.” 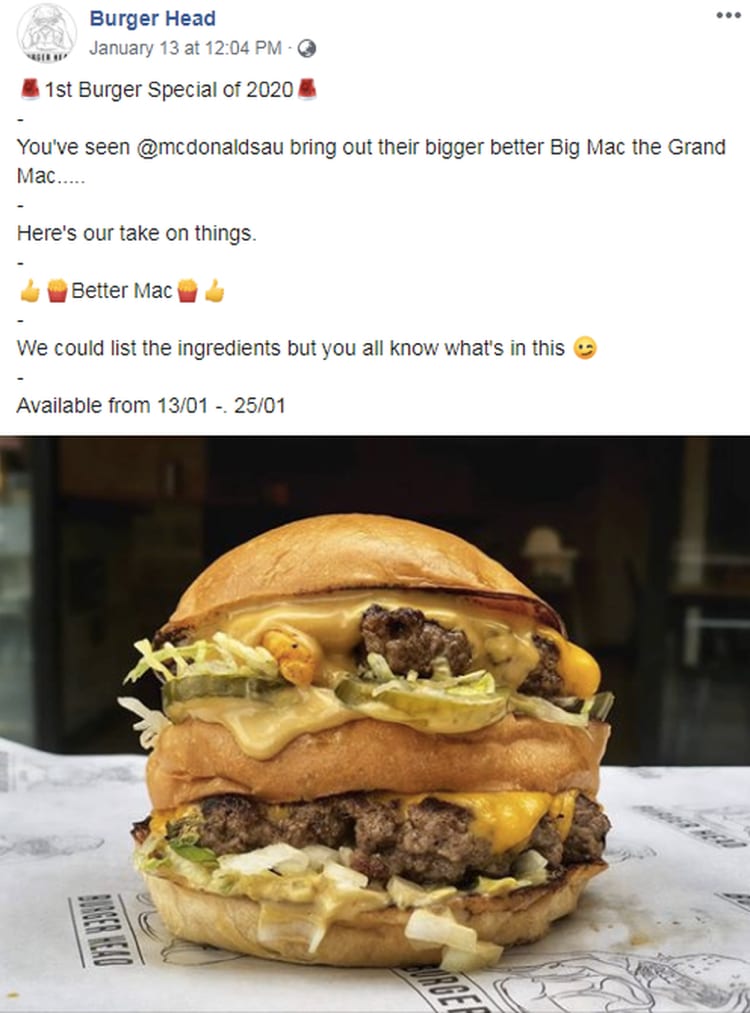 However, Burger Head didn’t get much time to treat their customers to the alleged Macca’s imitation.

The small business were surprised to receive a legal letter from McDonald’s, requesting that all posts that related to the alleged trade-mark infringement, be removed, as reported in 9News.

“You would be well aware that you have not been authorised by McDonald’s to use the Offending Mark in relation to the Offending Promotion,” stated the communication from McDonald’s.

“We therefore request that you take immediate steps to cease all use of the Offending Mark including removing the Offending Promotion from your social media platforms, and other websites or media.

“We trust you will appreciate the seriousness of the issues raised above and that this matter will not need to be escalated to our external lawyers for further action.” 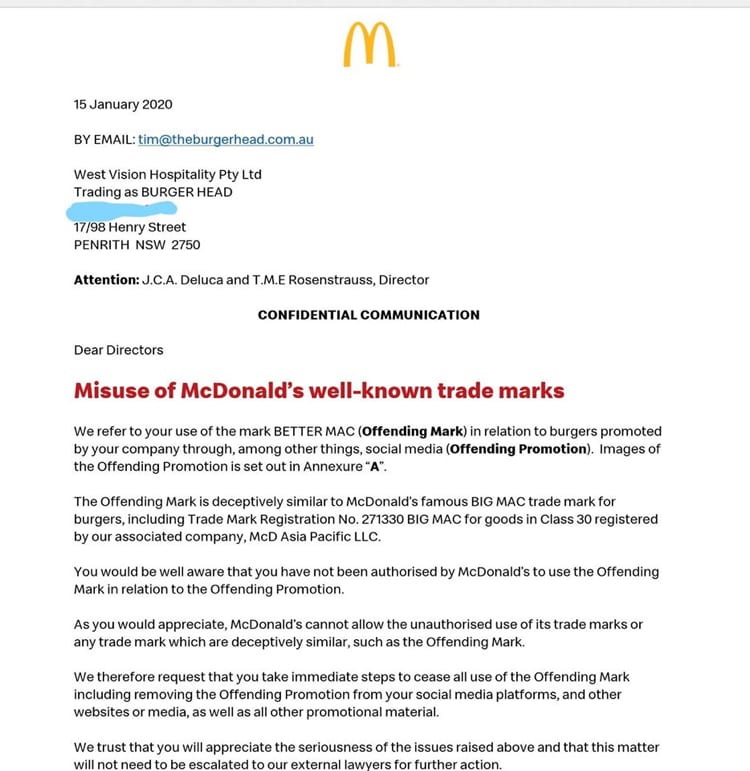 The owners of Burger Head, Joshua DeLuca and Timothy Rosenstrauss, spoke to nine.com.au, that while they did understand why they received the cease and desist, they were still shocked by McDonald’s reaction.

The founders said that they would be complying with the mammoth burger chain’s request.

“It was a little bit cheeky on our behalf, but we’ll edit the post to reflect the changes they requested,” Mr DeLuca said.

He did add that his burger was not actually “deceptively similar” to the Big Mac, as the letter suggested.

“We handmake all the beef, pickles and sauces in store – something very different to McDonald’s,” he said.

The Burger Formerly Known As The Better Mac

The burger place responded with a series of funny facebook posts:

This was followed with a call-out for a new name for the controversial burger:

“So a certain clown ain’t to happy with a certain special’s name.

We need a new name for it and open to suggestions

The one with the most likes wins

We think a certain legal team needs a Happy Meal.

The burger was then given the apt new name: “The Cease and Desist”.

They even cheekingly tagged McDonald’s in their latest post advertising the new name. Unsurprisingly…no response. 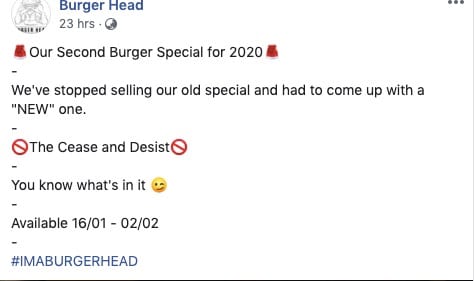 There are no joking around, smiles or Happy Meals when it comes to McDonald’s legal business.

A spokesperson spoke to nine.com.au saying:

“This is simply a marketing ploy to leverage our well-established and iconic brand.

“We hold no issue with the burgers themselves, however the name and promotion are infringing on our trademark by clearly mirroring our famous Big Mac.”

Do you think McDonald’s is overreacting or where they correct? Tell us in the comments below. 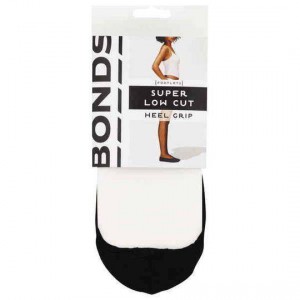