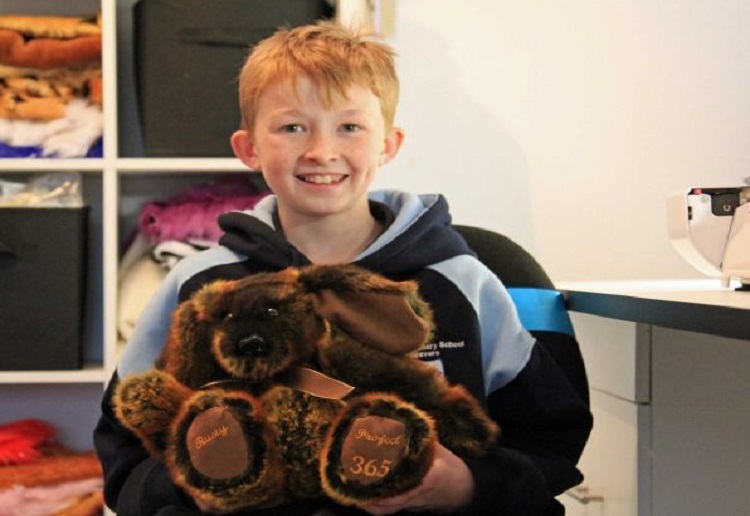 Campbell Remess is not like most 12-year-olds. For the last three years, Campbell has spent all of his free time sewing teddy bears for charity.

“I do comfort bears, which are for parents if their kids are in hospital having a hard time,” he said.

“I sent one over to Paris when the people got hurt, and I’m sending some over to Brussels too.”

Self-taught teddy bear maker, his charitable obsession started when Campbell decided he wanted to give Christmas presents to children in hospital.

“He asked if we could buy presents for children in hospital and I said ‘No way, dude’,” Sonya Whittaker, Campbell’s mum, said.

Ms Whittaker said she told Campbell that with nine children of their own, buying presents for sick kids would just cost too much.

Ms Whittaker said Campbell made six or so toys in a couple of days and then came to her with a pattern to make a teddy bear.

“He brought me this pattern and said ‘Mum, I can’t work this out. Can you have a look for me?’ I’m like ‘Nah, it’s beyond me’,” Ms Whittaker said.

She sent Campbell to bed, thinking that would be the end of it.

A few hours later, he came back with his first bear.

“He came down with this funky looking teddy bear that he’d made … it was incredible,” Ms Whittaker said.

“He’s just sewn and sewn since then.”

Campbell has pushed himself for the past two years to create a teddy bear a day.

In January Campbell wrote on his page –

“My name is Campbell but everyone calls me Bumble. Im 11 but I will be 12 this year. When I was 9 I asked mum and dad if we could buy Christmas presents for kids in hospital when they told me it would cost too much I decided to make them. I decided that I would make 1 present a day which is 365 a year and give them all away. I have done this for two Christmases now and I love it. I make special bears to auction and fundraise for people too. This is my page to share my story and show you the things that I make.

I use my pocket money to buy fabric and things but if you would like to help me my  contact is Project365bycampbell@hotmail.com

If you know of a child that I could send a bear to and would like to share their story please message details. I don’t have enough for everyone but I do send lots out but mum doesn’t like me to read all the stories though

Thank you to everyone for following my page and helping me with my project from Bumble.” 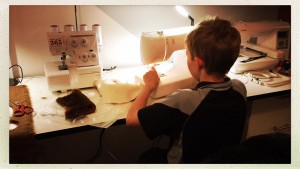 Surprise make over for Campbell’s room

Campbell has a Facebook group called Project 365 by Campbell.

One of the group’s members, Kat, was recently inspired to help Campbell, reports ABC.

“I sent his mum a message one night to ask if he needed fabric,” Kat said.

“She came back with a definite no, but [she said] what he did need was storage space.

Kat used the money to buy Campbell a work bench and storage space to hold all the donated fabric he has.

A team of volunteers set to work while Campbell was at school to transform his bedroom into a sewing room.

Kat said she wanted to help Campbell in some way to say thank you for all the work he had done.

“He’s such a selfless little boy,” she said.

“He does it all off his own back with his pocket money and donations from other people, but asks for nothing in return.

“And to have a special work space set up so he can do that, I thought would be ideal — and now he’s got it.”

Ms Whittaker said she often thought about what would have happened if she had said no when Campbell first asked to use her sewing machine.

“Look at the last three years of experience and practice and skill he’s got … look at what the word ‘yes’ has done,” she said.

“Just one simple ‘Yep, knock yourself out’ — and he has.”