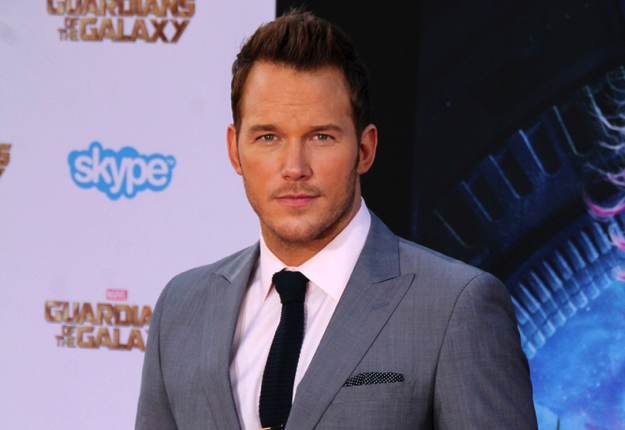 Get ready to add him to your list of Hollywood hotties. He’s about to become a huge name – he’s the star of the latest Marvel blockbuster Guardians of the Galaxy and he’ll star in the next Jurassic Park.

Or you might know his voice – he was Emmett in the Lego Movie, and he used to be a dumpy Jack Black type actor, a funnyman on the comedy Parks and Recreation.

“The truth is, Chris Pratt is the biggest movie star in the world,” said Guardians of the Galaxy director James Gunn. “It’s just people don’t know it yet.

The 35-year-old went from chunk to hunk to play a soldier in Zero Dark Thirty, then stacked it all back on again for Vince Vaughn’s comedy The Delivery Man.

Once again it was time to whittle it all off until he now looks like this:

Plus, he’s a lovely guy. Married to comedy actress Anna Faris, “I married way out of my pay grade,” he says. “I have no idea how that happened. She’s so goddamn funny and so good. She is a legit comedy powerhouse. But I’m not going to question it too much. I don’t know what it is, man. I guess chicks dig love handles or something.”

Among his many skills is – are you ready for this? – french braiding.

He posted the image below on Instagram with the caption: ”

He even conducted an interview promoting Guardians of the Galaxy while braiding an intern’s hair, without skipping a beat:

The couple have a nearly 2yo son, Jack, which has led to a new awakening for the actor. “I heard someone say pretty accurately that in parenthood, there’s never a dull moment, even though every moment is dull. I’m experiencing way more real and lasting highs — but they’re a little fewer and farther between.”

What’s more, “Having to follow Jack around and pick up after him made me realize how often Anna had been doing that for me. It’s like, ‘Wait a minute, why is all this crap everywhere? Oh, right, someone was picking it up for me.’ So I’m not taking that for granted anymore,” he said.

Will you be adding Chris to your list of Hollywood hotties?